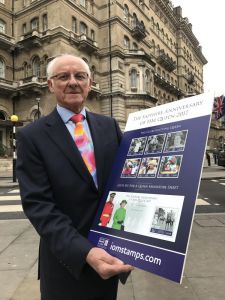 On the occasion of HM The Queen's Sapphire Jubilee, Isle of Man Post Office is pleased to present a set of six stamps representative of Her Majesty's important state visits and a miniature sheet showcasing a selection of gifts from the collection of presents Her Majesty has received from countries she has visited during her 65 year reign. The Manx stamps will be issued on 6th February 2017.

The set of stamps and miniature sheet is accompanied by text prepared by Dickie Arbiter, former press secretary to HM The Queen and HRH Prince Charles, and the late Princess Diana. Dickie has over four decades of experience covering royalty as a broadcaster and journalist; he is highly regarded as one of the most knowledgeable and sought after experts on today's British Monarchy.

Commenting on the stamps, Dickie Arbiter said: "Since the introduction of the world's first adhesive postage stamp, bearing 'Queen Victoria's head', was issued in 1840 countries from around the globe have used the 'stamp' as a tool for celebration. To mark The Queen's Sapphire Jubilee the Isle of Man Post Office have produced an incredible collection of stamps depicting Her Majesty in just some of the many countries she has visited. Whether one is a stamp collector or not, this series is of great significance in that Queen Elizabeth II is the first in the history of the monarchy to reach this momentous milestone".

In the stamps text Dickie talks about HM The Queen being the most travelled monarch in history. Her Majesty who visits countries upon the request of the Foreign Office or the Commonwealth has visited over 120 countries and all but two of the 52 member nations of the Commonwealth, sixteen of which remain Realm states which means she is still their Head of State.

HM The Queen has visited Australia 15 times, New Zealand eight times and Canada, which recognises and celebrates 150 years this year as a federation, 22 times. To add to this, Her Majesty recognises and celebrates different faiths and historic visits have included visits to temples, mosques and synagogues. Other historic visits have included Ireland in 2011 where she became the first monarch to step foot in the Republic since her grandfather George V in 1911, a visit to the Isle of Man in 1979 on the 1000th annual air sitting of the Isle of Man's Parliament, Tynwald, returning once again in 2003 over the Tynwald Ceremony.

Alongside her state visits Her Majesty has received an eclectic array of gifts which are either put on display at royal palaces or loaned out to museums, zoos or galleries. For instance as a Silver wedding anniversary present the President of Cameroon gave Her Majesty a five year old bull elephant called 'Jumbo'. Other gifts have included a pair of sloths from her 1968 visit to Brazil and two black beavers from Canada in 1970. More recent gifts include an iPod from President Obama loaded with show tunes and images from Her Majesty's trip to Virginia in 2007 and in 2015 German President Joachim Gauck gave her a marzipan version of the Brandenburg Gate along with an acrylic painting from an early photograph of her on a Shetland pony.

The miniature sheet contains a black and white £3.75 stamp which shows HM The Queen being presented with the horse Burmese by the Royal Canadian Mounted Police when they came to the UK to perform in the Royal Windsor Horse Show in 1969.

Maxine Cannon, Isle of Man Stamps and Coins General Manager, said: "2017 completes three hugely successful years for HM The Queen. In 2015 she became the longest reigning monarch in British history and in 2016 she became the first British Monarch to celebrate her 90th birthday. Now, in 2017, she will become the first British Monarch to celebrate a Sapphire Jubilee, a historic achievement, and one worthy of recognition. Isle of Man Post Office is proud to present a set of stamps and miniature sheet in recognition of Her Majesty's state visits to mark 65 years on the throne."

The stamp set and miniature sheet is available to order from today and can be purchased and viewed at https://www.iompost.com/stamps-coins/collection/future/