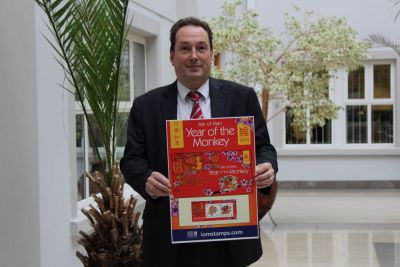 Isle of Man Post Office is pleased to present its first miniature sheet of 2016 which celebrates the Chinese Year of the Monkey. This stunning sheet launches on January 20th 2016 and continues to recognise the Island's special commercial and diplomatic relationship with China.

The Monkey is the 'ninth' sign in the Chinese zodiac, and during the year numbers nine and four or combinations of the two together are considered lucky. It is believed, people born under the sign have personalities that are smart, quick-witted, frank, optimistic, ambitious and adventurous. Monkeys are also believed to be best suited to careers in accounting and banking, science, engineering, film directing, and could be born in 1944, 1956, 1968, 1980, 2004, 2016 and 2028. Chinese New Year 2016 begins on Monday 8 February, and ends on 22 February 2017 according to the Chinese Lunar calendar.

This unique collectable miniature sheet uses vibrant colours including red, a symbol of good fortune and joy in China. During Chinese New Year, other holidays and family gatherings red is found everywhere. The sheet has been designed by two Chinese artists, the 10p stamp showing a cheeky looking monkey and the £2 stamp a mother with its baby. Both stamps show a busy pattern on each; typical of Chinese design and in the background we see Chinese lanterns and a red monkey perched on a Chinese Blossom tree. The sheet also captures the signs lucky colour gold.

Steven Beevers, Head of Special Projects at the Isle of Man Department of Economic Development with key focus on developing new business for the Island from China, said: "Much as the tiny nation that is the Isle of Man, it has a rich history and culture and yet has been relatively unknown in China. So too does China, despite its scale and magnificence, have a depth and richness of culture and heritage but which as yet may still only be superficially appreciated in the West...

For example, it is fascinating to note that the ancient Chinese zodiac is based on a rotation of 12 animals combined with Wu Xing, the five different elements, to create a 60 year cycle which is vastly more complex in its design and analysis than the Western based zodiac.

As we enter 2016, the Isle of Man has been building business and governmental relationships solidly for the past four years and the Isle of Man is now certainly becoming better known in China so the 'Year of the Monkey' is expected to see the realisation of this effort through some tangible new business.

This latest in a series of initiatives by the Isle of Man Post Office to link the Isle of Man to China in the beautifully presented 'Year of the Monkey' stamps, is yet another great way of helping put the Isle of Man on the map while helping build awareness of our two rich cultures".

Maxine Cannon, Isle of Man Stamps and Coins General Manager said: "We are delighted to present this special miniature sheet which celebrates the beginning of the Lunar New Year, the most important traditional celebration for Chinese families and a time for many traditions. The Chinese zodiac is based on a 12 year cycle, each year in the sequence is related to an animal sign and this year we celebrate Year of the Monkey."