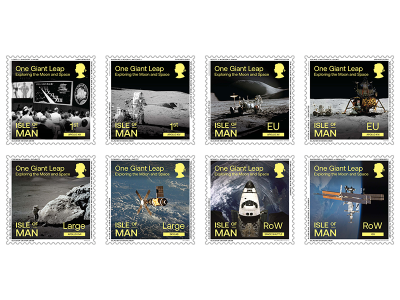 Isle of Man Post Office (IOMPO) is pleased to present a set of eight stamps titled ‘One Giant Leap, Exploring the Moon and Space’ to be issued on 26th February 2020. The issue follows the release of ‘One Small Step’ in April 2019 commemorating the missions of Apollo I to Apollo XII and celebrating the 50th anniversary of the Moon landings.

April 17th 2020 marks the 50th anniversary of the launch of Apollo XIII with Astronauts James (Jim) A. Lovell, John L. Swigert and Fred W. Haise on board. All of them made it to the moon and back but Apollo XIII famously failed to land on the moon when two days into the mission an oxygen tank in the service module was damaged. Astronaut Jim Lovell called it a “successful failure” and the mission has been repeatedly called “NASA’s finest hour”.

The stamps are designed by Glazier Design, who have designed this issue to be a continuation of part one, ensuring both issues correspond to one another. The designs place focus on the technological advancements and human achievements of the past five decades.

Former NASA Astronaut Nicole Stott said: “Many missions came before and came after Apollo XI. 50 years on we are only just now beginning to take those very same steps again, but this time we stay for good and like before for the good of all.”

Maxine Cannon, Isle of Man Stamps & Coins General Manager said: “The history of human space flight remains an interesting topic to humankind and being able to share these fascinating images with the world fills us with pride. We are very grateful to George Abbey and NASA; their support was of vital importance in the creation of this captivating stamp collection. Without their input and guidance we would not be able to provide our valued customers with such detailed background information.”

We dedicate this issue to the crews of Apollo I and Space Shuttles Challenger and Columbia, who gave their lives in the quest for human space flight. Their sacrifice is part of a great leap forward for humanity, our return to the Moon and on to Mars.