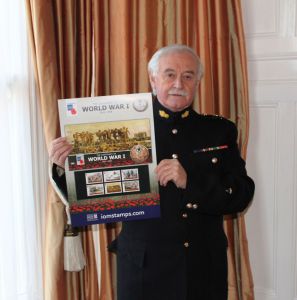 Isle of Man Post Office has produced a set of six poignant stamps in support of the Royal British Legion, commemorating the centenary of the Battle of the Somme, a battle of attrition on the Western Front that proved such a significant lesson to all nations. The stamps are due for release on 17th February 2016.

The Battle of the Somme, also known as the Somme Offensive, was a battle born out of political pressure, fought by the armies of the British and French empires against the German empire. The Battle was one of the largest of WW1 and took place on both sides of the River Somme in France between 1st July and 18th November in 1916.

The first day of battle, 1st July 1916, became notorious for the fact that over 60,000 British casualties were sustained in many areas for little or no gain. Included within these casualties was young Manx soldier, Ashley Watterson McGain of Port Erin on the Isle of Man. Ashley is remembered in the presentation pack, as a tribute to him and all the soldiers who died during the battle. As the battle progressed, the British army developed and refined its tactics, introducing tanks for the first time in the history of warfare, and pioneering cooperation between aircraft and ground forces.

Following the setbacks on 1st July, British objectives shifted to the total destruction of the German army rather than just a simple breakthrough. The Battle of the Somme eventually lasted four and a half months and in that time the Germans were driven back six miles. Many historians consider the battle as being a significant milestone on the road to victory for the allied forces in 1918.

Each of the six stamps feature the fields of poppies and use images from moving scenes at the Battle of the Somme that depict an historic change in the warfare of the time: the introduction of the tank, heavy artillery, chemical warfare and the price paid by a generation and 'the missing of the Somme'.

Charles Wilson, Honorary Colonel of Isle of Man Army Cadet Force said: "The First World War (1914-18) was remarkable for its impact of loss to Europe both of soldiers and civilians who were caught in the conflict. Many Manx men were lost along with their hopes and dreams, and this stamp issue records their contribution and sacrifice."

Maxine Cannon, General Manager of Isle of Man Stamps & Coins said: "We are pleased to present this poignant set of stamps in support of the Royal British Legion on the centenary of the Battle of the Somme, a significant attack that saw an enormous loss of life during WW1. We are also grateful to Matthew Richardson of Manx National Heritage who prepared the accompanying issue text which provides a detailed account of the battle."