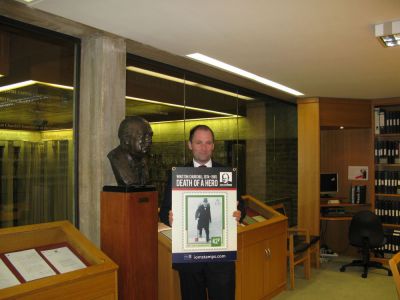 To commemorate the 50th anniversary of the death of Sir Winston Churchill, Isle of Man Post Office has produced a set of eight evocative stamps celebrating the life of the man once voted 'Greatest Briton'.

Working with the Churchill Archives Centre at Churchill College, and Chartwell, the National Trust family home, and with access to private photograph collections courtesy of the family, the Isle of Man Post Office has captured a true portrait of this enigmatic character; the legendary politician, the great orator, the wartime leader, the soldier, the prolific writer, the talented artist and even the apprentice bricklayer!

The stamps are available in mint condition and cancelled to order sheet sets, mounted on a specially-designed First Day Cover, accompanied by an illustrated information card, and as part of a presentation pack containing a four-page mini brochure revealing more of the Churchill story and featuring additional photographs.

The issue bears the official Churchill 2015 logo of the Churchill Alliance, which is spearheading commemorations of the 50th anniversary of his death, and text written by Allen Packwood, Director of the Churchill Archives Centre in Cambridge.

Mr Packwood said: "It is wonderful that the Isle of Man has decided to recognise Sir Winston Churchill in this way on the 50th anniversary of his death. I love the way the stamps capture the different aspects of his amazing life and personality: from statesman and orator, to writer, painter and even would-be bricklayer."

Churchill was born into an aristocratic family in 1874 and served with the British military before being first elected a Member of Parliament in 1900. He is best remembered for his leadership during World War II, after becoming Prime Minister in 1940, and his rousing speeches which galvanised British morale in the face of German aggression. Despite losing the 1945 general election, Churchill remained in politics until 1964, a year before his death at the age of 90.

He was also a published author, writing extensively on history and military campaigns, and a dedicated painter whose works are still collected and acclaimed today.

The Isle of Man paid tribute to Churchill in July 1957 when he was given the Freedom of the Borough of Douglas.

Maxine Cannon, General Manager, Isle of Man Stamps & Coins, said: "Sir Winston Churchill is one of the most significant figures in 20th century history, and we are proud to be joining the commemorations on the 50th anniversary of his death by issuing this exceptional stamp issue."

"Thanks to the assistance and co-operation of the Churchill Archives Centre and Chartwell, we have been able to capture more of the man with access to archive photographs showing Churchill not only as the inspirational leader we all know, but other aspects of his character which helped make him the icon which continues to attract worldwide admiration to this day."

Also commenting on the stamp issue, Katherine Barnett, House and Collections Manager of Chartwell Properties Portfolio – National Trust said: "The Isle of Man Post Office's new collection of commemorative stamps is a fitting tribute to mark the anniversary of the loss of one of our greatest statesmen. Sir Winston Churchill is most commonly known for leading Britain through the Second World War but alongside this he was a gifted orator, a talented artist, a critically acclaimed writer and so much more. This stamp series is a wonderful offering for the 50th anniversary of Sir Winston's passing and I am grateful to have had the opportunity to be involved in such a wonderful tribute to his life and legacy."

The Winston Churchill 1874-1965 - The Death of a Hero stamp issue can be pre-ordered now from www.iomstamps.com and is due for release January 2, 2015.