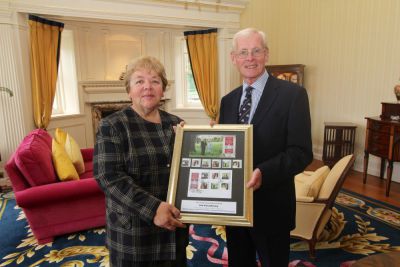 Isle of Man Post Office has issued a heart-warming set of six commemorative stamps on the 70th anniversary of the engagement of HM Queen to HRH Prince Philip. The issue titled Head Over Heels is due for release on 9th July.

The set charts landmark wedding anniversaries and is accompanied by Dickie Arbiter's warm and moving story of the couples long life of service and devotion to one another. Each stamp includes metallic print and a white orchid which was included in the Queen's bouquet on the couple's wedding day, and a quote from their wedding vows. The initial 1st class stamp in the set features a black and white image of the Royal Wedding in 1947, which is then followed by a further five high definition colour stamp images of the couple, each marking a subsequent landmark anniversary up until the present one, their Platinum Wedding Anniversary in 2017.

In the accompanying text, prepared by Dickie Arbiter, we learn of how Princess Elizabeth and Philip Mountbatten came to meet for the first time after HRH was assigned to entertain the King and Queen's daughters during a royal visit to the Royal Naval College, Dartmouth, in July 1939.

Within months of this meeting war was declared and Philip left to serve with the Royal Navy fleets in the Mediterranean and Far East but he and the Princess exchanged letters regularly, at least once per week.

At the end of the war Lieutenant Philip Mountbatten, as he was now known following promotion, was invited to join the royal family on their summer holiday at Balmoral. It was during this break that Philip, now 25, proposed to the 20 year old Princess. She accepted immediately. When the King was eventually asked, he provisionally agreed on condition that she allowed 'time for reflection' and that there would be no announcement until after she had turned 21.

On the 9th July 1947 the King and Queen made the long awaited announcement of the 'betrothal of their dearly beloved daughter, Princess Elizabeth, to Lieutenant Philip Mountbatten RN' and they were subsequently married at Westminster Abbey on 20th November in 1947.

There's no question that The Queen could not have had a better life partner than Prince Philip. They have shared a remarkable journey of togetherness where they love and appreciate one another. They are also the best of friends, understand each other's position and they've laughed away the years.

The Queen and Prince Philip have seen a changing world and they have adapted to it. They are soul-mates in a marriage that has stood the test of time, making their 70 years a truly remarkable platinum celebration.

His Excellency, Isle of Man Lieutenant Governor, Sir Richard Gozney, said: "I applaud the Isle of Man Post Office for congratulating HM The Queen and HRH The Duke of Edinburgh on their 70th Wedding Anniversary. I think this reflects the special place which Her Majesty and His Royal Highness hold in the affections of the people of the Isle of Man."

Maxine Cannon, Isle of Man Stamps & Coins General Manager, added: "We are pleased to mark this momentous year for HM Queen and HRH Prince Philip by releasing these special stamps on the anniversary of their engagement, 70 years ago."