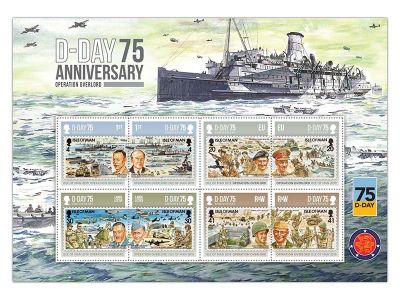 General The Lord Dannatt GCB CBE MC DL, Patron of The Spirit of Normandy Trust said:
'I welcome the issue of the D-Day commemorative stamps issued by the Isle of Man Post Office which will serve as a visual reminder of the historical significance of D-Day and the subsequent battle for Normandy. This was the generation that literally "saved the world". We owe them nothing less than to salute their courage and honour the memory of those who sacrificed their lives for our freedom.'

To mark the 75th anniversary of D-Day, the Isle of Man Post Office is privileged to issue a special commemorative collection of eight stamps on April 22nd 2019, honouring all the Manx men and women involved in the historic landings along the Normandy coast.

On 6th June 1944 Operation Neptune, commonly known as D-Day, launched the Battle of Normandy (Operation Overlord) along a 50-mile stretch of the heavily fortified coast of France's Normandy region, when some 156,000 American, British and Canadian forces started the largest seaborne invasion in history.

At the outset of World War II 10 of the Isle of Man Steam Packet Company's best ships were commandeered by the Admiralty sadly 4 were lost but throughout the war they made a significant contribution to bring WWII to a conclusion in 1945. Three of the vessel's "Lady of Mann I, Victoria and Ben-My-Chree IV", which saw action on D-Day, feature on the 1st class value stamps.

This stamp-on-stamp presentation, derived from our 50th Anniversary of D Day 1994 commemorative issue depicts the most prominent military leaders of the Allied Forces who formulated plans which marked the start of a long and costly campaign to liberate north-west Europe from German occupation.

Maxine Cannon, Isle of Man Stamps & Coins General Manager said: "The Spirit of Normandy Trust, who provide financial assistance for veterans of the three Services who served in Normandy, France during WWII, is a charity close to our hearts and we are proud to have been working with them on this special stamp collection. The sacrifices made by the brave men and women who fought in WWII should never be forgotten, which is why we felt it important and are honoured to commemorate the 75th anniversary of the D-Day landings."