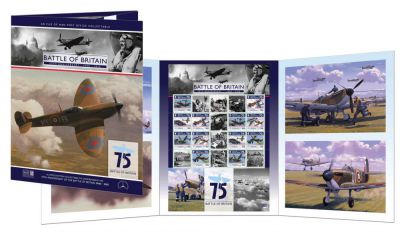 By the middle of June 1940, France had surrendered to Germany, leaving Britain to stand alone against the power of Germany's military forces which had already conquered most of Western Europe. Hitler had hoped by this time that Britain would sue for peace but he underestimated the will and determination of Churchill and the British people. Britain's situation was quickly recognised by members of the British Empire, who soon came to its aid with more reinforcements as they became available, and soldiers whose countries had been occupied by the Germans arrived to strengthen the squadrons of the RAF.

The Battle of Britain was fought in five phases and commenced on 10 July 1940. Over the coming months Britain's 54 squadrons with nearly 1000 fighters took to the skies in battle against the Luftwaffe's huge air fleets of 1200 long range bombers, 1100 fighters and 400 dive bombers. Britain's Fighter Command was made up of four groups which protected the South-East of England, Midlands and East Anglia.

Hundreds of lives were lost and Britain's defences were on the brink of collapse. By early October 1940 Britain had managed to thwart the attempt at supremacy in the air and the last official day of battle, 31 October, turned out to be the quietest with not a single aircraft of either air force lost. The battle led to Winston Churchill immortalising the bravery of the British & Allied pilots in his iconic speech when he said: "Never in the field of human conflict was so much owed by so many to so few".

In the lead up to WW2 Britain's Fighter Command's Commander-in-Chief, Air Marshal Sir Hugh Dowding had created a unique air defence system with a chain of radio direction finding sites (now known as Radar) around the coast of Britain using a centralised control and reporting system which in the end enabled Britain to gain its air supremacy preventing German invasion.

The Isle of Man's contribution to the Battle of Britain was one of significance. A higher percentage of its population was deployed to military service than any other British community during WW2. Included within this was legendary fighter ace RAF Group Captain Douglas Bader, who was raised on the Isle of Man. Bader, who had prosthetic legs having lost both his legs in an air crash in 1931, rejoined the RAF in 1939. In the final weeks of the battle the Manx public financed the build of two spitfires, "North Barrule" and "Manxman", the latter which was given to Captain Bader who went on to down 24 German planes between 1940-41.

Isle of Man Post Office has produced a poignant set of special collectables including a cupro nickel crown presented in a collector's box, a sheet of 12 commemorative stamps and special folder product containing black and white photos from the course of events over the battle, accompanied by paintings from renowned aviation artist Kevin Woodcock of fighter planes from both the German and British fleets as they met in dog fight.

Maxine Cannon Isle of Man Stamps and Coins General Manager said: "Battle of Britain could rightly be considered one of the most iconic battles fought in our history, a victory for Britain and the many brave soldiers that gave their lives in her defence. We are proud to mark this vital date in support of the Battle of Britain Memorial Trust in tribute to the brave work of 'the few'".

Isle of Man Post Office displays both a commemorative plaque for WW1 and WW2 at its Regent Street Post Office for postal workers who fell during both wars. After the Regent Street transition to the new shared store in central Douglas both memorials will be moved to go on display at Postal Headquarters.