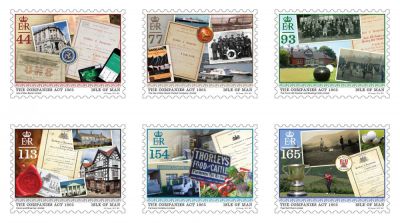 To view the stamp collection and pre-order please click here

Tynwald promulgated the Companies Act in 1865 and on 5th July it came into operation with Isle of Man Banking Company Limited incorporated as company no.1 on 26th October 1865. The Act has since been amended over the years on numerous occasions and there are currently eight acts of Tynwald that are collectively known as the Companies Act 1931 to 2004 with supporting rules, regulations and orders. More recently, the Isle of Man Companies Act 2006, also known as the 2006 Act, was introduced with laws that reflect the incorporation of modern and flexible corporate vehicles with simplified administration procedures. Incorporation of 2006 companies commenced in the Isle of Man on 1st November 2006.

Each stamp image displays a collage of original black and white and colour photos of premises and staff along with certificates of incorporation and company seals.

Maxine Cannon, General Manager of Isle of Man Stamps and Coins: "This has been a really interesting project and one that is hugely important to the Island and its commercial heritage. We'd like to thank John Wilkinson for his expertise and insight throughout the project and invite our public to celebrate the Companies Act on this important anniversary."

To view the stamp collection and pre-order please click here