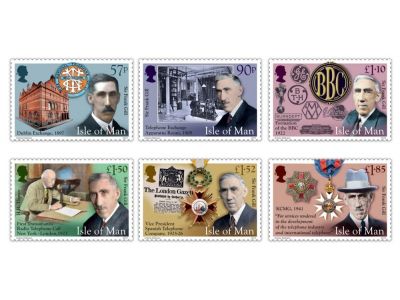 Sir Frank Gill KCMG OBE, born in Castletown in October 1866, was a global visionary telecommunications engineer. He entered the service of the United Telephone Co. in London at the age of 16 and by 1896 he was in charge of the National Telephone Co.'s activities in Ireland. From there he was called back to London in 1902 and became Engineer-in-Chief. When the Post Office took over the National Telephone Co.'s system in 1912 he became a consulting engineer in partnership with Mr. W. W. Cook and carried out telephone work in North and South America, Asia and Europe.

During the First World War he became Controller of the Central Stores Department in the Ministry of Munitions and was made an O.B.E. for this service. Another milestone of his impressive career that span nearly seventy years, was his presidency at the Institution of Electrical Engineers (IEE today Institute of Engineering and Technology IET).

By 1922 wireless telegraphy was developing rapidly and, fearing similar nationalisation seen with telephones ten years earlier. As President of the IEE Gill chaired the preliminary committee to establish one broadcasting company and this led to the foundation of the BBC.

Maxine Cannon, General Manager, Isle of Man Stamps and Coins said: "We are extremely proud to be celebrating another Manxman and one of Britain's pioneers of telephony. His achievements and involvement in telephony and wireless broadcasting have laid the foundation of today's communication. We are very grateful to author Robert Stimpson and the design team Andrew Robinson and EJC Design. With their support we managed to create a stamp collection that truly encapsulates Sir Frank Gill's life and career."