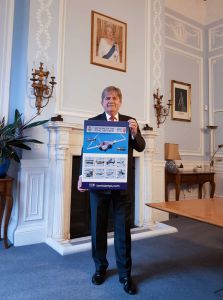 As a tribute to all who have served in the Royal Air Force (RAF) in the last century, Isle of Man Post Office (IOMPO) has commissioned a set of eight commemorative stamps, officially licenced by the Ministry of Defence, highlighting the rich history and legacy of the RAF – the world's first independent air force.

A unique feature of this stamp collection is the incredible depth of information that each stamp contains in relation to the RAF history. The stamps not only include images of iconic RAF aircraft – from the earlier fighter aircraft such as the Sopwith Camel, to the more recent Typhoon and Lighting II – they also contain other details such as key airfields, personnel, medal ribbons, flags and the RAF Ensign.

As an added bonus, each stamp also includes a secret message in morse code, which is only visible under UV light. Once deciphered, the message reveals the well-known poem 'High Flight', by John Gillespie Magee, a Canadian Air Force pilot who trained at the RAF Cranwell, Lincolnshire. The poem was penned shortly before he died, at the age of 19, in a Spitfire training accident at RAF Cranwell. His Spitfire call sign and engine number are included on the final stamp. Isle of Man Stamps and Coins General Manager, Maxine Cannon said, "We are really proud to introduce this outstanding collection of stamps, which has been meticulously developed to include as many layers of facts about the RAF and its history. Each tells a fascinating and inspiring story about the RAF, such as its operations - the state-of-the-art technology and innovation invested in its aircrafts and airfields – and individuals who played a crucial role serving the RAF and in defending the country."

The RAF was formed towards the end of World War 1, on the 1st of April 1918. Twenty-one years later RAF bases started to open on the Isle of Man, beginning with RAF Jurby in September 1939. RAF Andreas was opened two years later as a fighter airfield, while the civilian aerodrome at Ronaldsway was taken over by the RAF in 1940 and became RAF Ronaldsway. RAF Air-Sea Rescue marine craft were based at Ramsey, Peel, Douglas and Castletown during the war years.

Maxine added, "The Isle of Man has very strong and important historical links with the RAF and with the release of these highly collectable stamps, marking the RAF 100 year anniversary, we hope to reinforce these ties and look forward to many more years of aviation excellence from the RAF." David said, "These innovative and striking stamps, issued by the Isle of Man Post Office, are not only unique in their design but pay a great tribute to the exceptional people who have contributed to the success of the RAF in the last 100 years. The RAF Benevolent Fund is very pleased to be featured in the stamp products, as it demonstrates the important impact that we have made, proudly supporting the RAF family through thick and thin since our formation in 1919."

The collection was designed by Ben Glazier and his team at Glazier Design, a creative agency in London. Ben's grandfather Geoffrey Glazier was a Royal Flying Corps pilot on active duty in France on the 1st of April 1918, making him one of the first RAF Officer Pilots on that first day. His war lasted only three weeks before he was shot down and injured.

Ben said, "It is an honour and a privilege to create these stamps for IOMPO and the RAF, honouring not just my grandfather, but the many pilots, ground crew, nurses, technicians and others who paid the ultimate price in their service to the RAF and our country. We always try to add interest to the stamps we design to recognise the value of those they commemorate; this has been a most special commission for us."

The issue date for the IOMPO 100 Years of the RAF stamp collection is the 15th of January 2018. The collection is available for purchase via postal order, telephone (01624 698430) or online.

IOMPO offers a 'no quibble' return policy, free worldwide delivery and aims to despatch an order within 24 hours by First Class post (Monday to Friday). For more information about IOMPO's stamp collection or delivery policies, customers can visit IOMPO's website