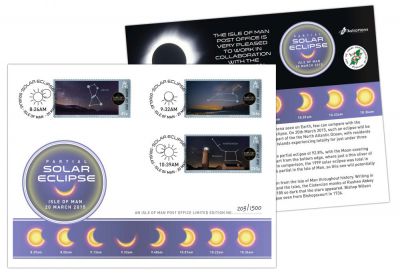 To view or pre-order the limited edition eclipse cover or celebratory folder (which includes an exclusive cover signed by Astronaut Alan Bean) to remember this very special occasion click here.

On March 20th, Isle of Man Post Office releases a special limited edition cover to mark the eclipse and, in conjunction with Onchan Primary School, will be hosting a Solar Eclipse Day at the school to celebrate the event.

For the first time in 16 years, on March 20th, a partial eclipse with the moon covering 92.8% of the sun will be seen over the Isle of Man. The solar eclipse of 1999 saw only 88.2% partial coverage, making this year's potentially spectacular!

The event being held on the afternoon of the 20th at Onchan Primary School will see year 5 children from Onchan School and other local schools, who are studying space as part of the curriculum, invited to come and listen to a live Skype talk from Astronaut Alan Bean, the 4th Man to walk on the moon.

To add to this, Isle of Man Post Office has produced a special cover which is postmarked March 20th, 2015 and is comprised of text and a cover concept from Howard Parkin of Astro Manx. The cover includes three postmarks that show key times of the eclipse, as well as illustrating the moons passage over the sun. The cover is further complimented by three Dark Sky Discovery stamps placed on it from the Post Office's recently released Dark Sky Discovery stamp issue.

Jo Richardson, Head Teacher of Onchan Primary School said: "We are really excited to be given the opportunity to talk to Alan Bean. Being an Astronaut is often one of the first aspirations children have and to be given this unique experience, is a dream come true. Our year 5 children are studying space as part of our curriculum and are looking forward to being given the opportunity to interview such an iconic astronaut, who has worked incredibly hard to realise his aspirations."

Maxine Cannon, General Manager, Isle of Man Stamps and Coins said: "Of all the natural phenomena visible from earth few can compare with a solar eclipse. Eclipses have been celebrated for millennia and we want to do everything to mark this rare occasion which we feel our special postmark cover will achieve. It's also been great working with Onchan Primary School and complementing the pupils' studies by them hearing from someone like Alan Bean who has done something that very few people ever have. I'd also like to thank Howard Parkin of Astro Manx who has provided us with his assistance in arranging the Solar Eclipse Day event and the production of our cover."

To view or pre-order the limited edition eclipse cover or celebratory folder (which includes an exclusive cover signed by Astronaut Alan Bean) to remember this very special occasion click here.