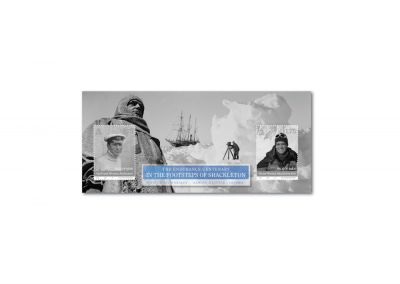 Isle of Man Post Office is honoured to present a special miniature sheet to mark the remarkable survival story of Sir Ernest Shackleton and the crew of the Endurance. The stamps which are due for release on May 10th also remember the late explorer Henry Worsley.

The Trans-Antarctica expedition of 1914 - 1917 is one of the most extraordinary adventure stories of all time. After two previous expeditions to the South Pole, Sir Ernest Shackleton planned a third trip to the Antarctic in 1914. The expedition was struck by disaster when the ship, Endurance, became trapped in ice and eventually sank. This resulted in the ship's 28 strong crew being forced to abandon it to live on floating ice. Once the ice began to disintegrate Shackleton and his crew launched three small boats and reached Elephant Island on 15th April 1916, and ultimately five crew members and Shackleton went on to the inhabited island of South Georgia on 10th May 1916 to seek help after a stormy sea voyage of 720 nautical miles. Amazingly, when rescuers reached Elephant Island two years after the expedition set off, all the crew were found alive despite desperate and life-threatening weather conditions.

In 2014, Henry Worsley, explorer, British Army Lieutenant Colonel, and descendent of Frank Worsley, the captain of the Endurance, set out in the spirit of his hero, 100 years after Sir Ernest Shackleton's ill-fated trip from Berkner Island on 13th November 2015, to attempt the first ever solo, unsupported and unassisted crossing of the Antarctic landmass. Worsley's ambition was twofold: to commemorate Sir Ernest Shackleton's intention to cross the Antarctic continent on his Endurance expedition 100 years before, and to raise £100,000 for the Endeavour Fund, a charity of The Royal Foundation set up to assist injured ex-service men and women. Worsley, who was on the brink of becoming the first man to cross the Antarctic unaided covered an extraordinary 913 miles, and was 30 miles short of his goal when he was forced to call for help after succumbing to exhaustion and severe dehydration. Worsley subsequently died on 24th January 2016 in hospital in Punta Arenas, Chile.

The miniature sheet, which was printed using a special metallic overprinting technique to reproduce the effect of a silver nitrate photographic print of the period while lending a contemporary feel to the graphic content, stunningly captures in black and white a statue of Sir Ernest Shackleton, located at the Royal Geographical Society's London Headquarters, on his Imperial Trans-Antarctic Expedition (1914 - 1917), with the Endurance shown trapped on pack ice. There is also a depiction of the expedition's official photographer James Francis (Frank) Hurley and two stamps, one containing an image of Endurance's Captain Frank Worsley and the other is of Henry Worsley on his Solo Expedition in 2015.

Maxine Cannon, Isle of Man Stamps & Coins General Manager said: "We are pleased to present this miniature sheet to mark 100 years since the legendary Shackleton Expedition and to pay tribute to the late explorer Henry Worsley who died on 24th January whilst completing the final part of his Antarctica expedition. Both Shackleton's Endurance and Henry Worsley's solo, unsupported expedition tell two inspiring and courageous stories about bravery, determination and survival, and we are pleased to honour each of these in our latest stamp issue. We would also like to thank The Endeavour Fund and Catherine Gale of the Shackletonsolo website and of course the family of Henry Worsley for their kind assistance with our stamp issue."

Henry Adams, a close friend who accompanied Henry on the 2008 expedition said: "Henry led three significant polar expeditions which have raised substantial funds for charity. He is the only person to have skied the three historic routes pioneered by Sir Ernest Shackleton, Captain Scott and Roald Amundsen. He has inspired thousands of people around the world and this stamp issue is a fitting way to capture the spirit of Henry and his idol Sir Ernest Shackleton. As Henry would say, 'Onwards'."

To view the miniature sheet and to order please click here