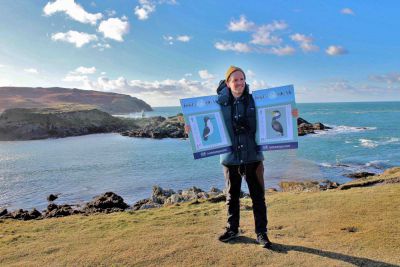 Isle of Man Post Office is pleased to present a stamp collection featuring the illustrations of artist and ornithologist Matt Sewell. The partnership, under the brand 'Matt Sewell's Birds' was licensed by Penguin Random House Enterprises. The stamps beautifully depict a selection of 'birds spotted and jotted in the Isle of Man' with an exclusive illustration of the Manx Shearwater. The stamps together with Matt's latest book Penguins and Other Sea Birds are both due for release on March 24th.

Matt Sewell, who has been described as the Banksy of the bird world, is the former artist in residence of the BBC's Springwatch Unsprung, and has also appeared on Countryfile. His watercolour illustrations can be found across a variety of media and in a series of six books, including Our Garden Birds and Owls which also include his whimsical descriptions of birds.

Matt, who has worked closely with the Post Office's Stamps & Coins division to devise its latest issue, recently visited the Sound and Cregneash Village on the Isle of Man to study the local bird life. As a bird observatory the Calf of Man (which is located close by) attracts around 33 species of birds that breed on the Island annually, ten of which are sea birds.

In the text that accompanies the stamp issue, Matt describes how birds have been a constant – and obsessive - part of his life. During his childhood, he immersed himself in bird books, pictures and postcards, and was fascinated by birds' colours, markings and forms which he has characterised in his illustrations. For instance, he describes Buntings, Tits and Finches as being cute, cheeky chaps, the heavy brow of the Sparrowhawk leaving him stricken with fear, and the gorgeous pink Linnet making him swoon.

Matt goes on to say that the British Isles is handy for migrating birds stopping off to rest and recuperate, and that it's also useful for the great stretches of coastline and islands that make homes for our abundant array of sea birds including the Isle of Man's beautiful Manx Shearwater. He also refers to his conservation work with several charities in the UK in order to raise awareness of declining UK bird habitats.

The stamp issue contains ten beautiful watercolour illustrations of birds including an exclusive image of the Manx Shearwater. Resident on the Calf of Man, the Manx Shearwater was in decline; following recent conservation work by Manx National Heritage and other organisations the Shearwaters are once more on the increase. The other birds featured in the issue are the Robin, Pheasant, Goldfinch, Tawny Owl, Starling, Blue Tit, Puffin, Hobby and Cormorant. Each is depicted in Matt's unique and much-loved watercolour style, accompanied by his whimsical descriptions. The stamps are available as part of a presentation pack with a photo of Matt at Cregneash Village, and there is also a special limited edition stamp sheet album.

Commenting on the stamps project Matt Sewell said: "Stamps are so iconic – it's amazing to see my illustrations featured in this way. It's been wonderful working with Isle of Man Post Office to showcase the diverse species of birds that visit the Island."

Jo Edwards, Head of Random House Enterprises said: "Matt's illustrations work across such a wide variety of products and it's great to see them depicted on such a beautiful set of stamps."

Maxine Cannon, Isle of Man Stamps & Coins General Manager said: "It's been a pleasure working with Matt on this stamp collection. The stamps are miniature artworks, and we are delighted with the unique image of the Manx Shearwater which Matt created exclusively for us as a part of our stamp issue."