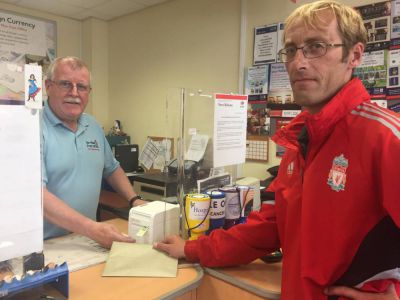 The new stamps service, which was also recently rolled out to all of the Post Office's Pay & Post Kiosks, replaces the simple blank self-adhesive postage paid vended labels which were used until now. As part of the ongoing investment into the post office counter network, the service is planned for full roll out by the end of 2017.

Variable rate definitive stamps are known as Post & Go stamps and Faststamps in a number of other jurisdictions, they are popular, highly collectible and viewed as one of the latest developments in self-adhesive stamps.

These highly collectible stamps include the five digit date of issue, a sequential number and stamp identifier which indicates where the pictorial stamp has been issued on the Isle of Man, and are available in the following denominations 45p, 77p, £1.25 and £1.86 among other values for postage. The stamps are individually printed as with the current label vending process and their withdrawal policy matches the post office's current issues and forms part of the post office's year collections.

The initial design available, 'The Triskelion Definitives', features four highly attractive designs based on the Island's national emblem, the Three Legs of Man. The four images show the three legs that appear in Douglas Town Hall, a triskelion design that incorporates smaller visuals of the Millennium of Tynwald three legs, the three legs as seen on a quayside building in Castletown and a new modern interpretation of the three legs of Man. Other future designs will be created for release at both the kiosks and counters in 2018.

Alan Clucas, Sub Postmaster of Pulrose Post Office said: "We are pleased to now be providing these fabulous new machine vended stamps at Pulrose Post Office. They are a vast improvement on the plain vended labels we had previously. Our customers are happy with them too."

Stamps & Coins General Manager, Maxine Cannon, said: "We are pleased to have rolled the pictorial stamps out to all of our kiosks across the Island and are delighted to now be able to offer the stamps from our counter in Pulrose Post Office. The new designs promote our national symbol on and off Island to a wide audience through mail items which are delivered worldwide.

Pictorial stamps are also extremely popular among stamp enthusiasts and the interest in these types of products continues to grow."