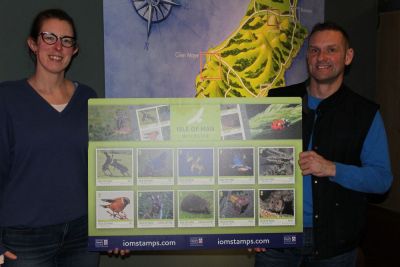 Ten wonderful stamps will be issued on February 12th 2019 illustrating a variety of wildlife to be found by the patient and observant on the Isle of Man.

Manx photographer Brian Liggins, who was born in Douglas on the Isle of Man, became interested in wildlife as a youngster when he spent a lot of time on his grandparents farm. Self-taught, he first took up photography about 11 years ago and has since gained a lot of knowledge and experience. The father of three claims to not be a patient person but says all changes while he is waiting for hours to get the perfect picture.

Brian says: "I enjoy the challenge of taking pictures of wildlife as it is always on the move so you have to be ready and focused to capture the moment. I spend hours waiting and trying to get the right shot. I travel all over the Island to picture different species. The light plays a big part in capturing the perfect image."

Laura McCoy, Natural History Curator at Manx National Heritage, provides the expert commentary for this versatile stamp collection. After acquiring a Bachelors and Masters in natural sciences at university and working in field ecology, she retrained in museum conservation, specialising in natural science collections. She started her career at The Natural History Museum, and has since worked in a number of institutes in the UK and abroad, but moved to the Isle of Man in 2017 to take up the post of Natural History Curator at Manx National Heritage.

Laura writes: The landscape of the Isle of Man has changed since it separated from the UK around 8,500 years ago. Surrounded by the Irish Sea, the Island is influenced by all its nearest neighbours, and yet is unique in its composition of wildlife, making it something to be treasured and protected. Islands can be hugely important in terms of supporting rare species and serve as refuges, but their sensitivity to environmental impacts increases the smaller they are. The continued presence of rarities like hen harriers, lesser-mottled grasshoppers and the greater butterfly orchid is by no means guaranteed and government agencies and wildlife groups manage and monitor the Manx countryside to support them.

Alien species, such as wallabies and harlequin ladybirds, compete with indigenous wildlife, impacting biodiversity and food chains. We are seeing more attention being given to curbing the spread of Japanese knotweed and Himalayan balsam and hope to have these tenacious plants eradicated in the coming years. We are also lucky enough to have a population of honey bees that, unlike many places in the world, have so far avoided being infected by invasive varroa mites because of the continued vigilance of the bee-keeping community.

Numerous areas are managed for wildlife on the Island, such as the Ayres, Cooildarry and Ballaugh Curragh, plus over ten percent of our territorial waters are marine nature reserves. There are many instances where the local community can help keep our Island a beautiful place to live and work, such as not disturbing ground-nesting birds, picking up dog waste, buying local produce and not dropping litter; we have already seen the huge impact that beach-cleans can have and the work does not stop there; helping experts monitor local wildlife at coordinated events can also feed into long term scientific studies.

Maxine Cannon, Isle of Man Stamps & Coins General Manager said: "It's been a pleasure working with Brian and Laura on this stamp issue. The collection not only displays the beauty and variety of our wildlife, but also serves as a reminder that this diversity in such a small area also raises ecological challenges."