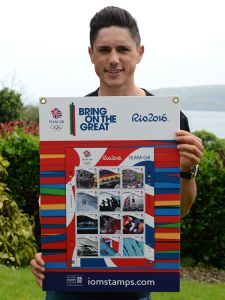 From 5th - 21st August 2016 the city of Rio de Janeiro will host the Games of the XXXI Olympiad and, in recognition of Team GB's participation, Isle of Man Post Office has taken the lead as the only postal administration to launch a set of Team GB stamps in celebration of this global event. The stamp collectibles were released on 23rd May.

These stunning stamps are available as a set – there is also a sheetlet, presentation pack and special covers with date postmarks including first day of issue. The accompanying stamp literature includes high definition images and beautifully incorporates the colours of the Union Flag and likewise Team GB - red, white and blue. Each stamp is to the value of £1.27, and depicts the Team GB logo and a different sporting event of the Olympic Games using a range of vibrant colours - cycling, athletics, gymnastics and swimming.

A record number of countries will be participating in many sporting events at this year's Games. More than 100,000 people will be directly involved in the organisation of the Games, including 70,000 volunteers, and 10,500 athletes from approximately 206 countries from around the world are expected to come to the Rio 2016 Olympic Games to compete in front of a global audience. The inspiring performance of Team GB during London 2012 captured everyone's imagination and saw a genuine outpouring of support and pride which lifted the mood of the nation. Team GB will be looking to retain that support and feel good factor during Rio 2016 and will look for part of that support to come from the Isle of Man with Manx athletes again representing Team GB in Rio.

It was in 2012 that Team GB's Peter Kennaugh MBE struck gold in London as part of the team pursuit track cycling quarter which smashed the Olympic and world records in the final, a century after the Island's first gold medallist in 1912. In celebration of Peter Kennaugh's gold medal win at the London 2012 Olympic Games, the post box outside Onchan Post Office was transformed into gold to recognise his outstanding achievement. Manx-born rower Sidney Swann was the Isle of Man's first competitor to win an Olympic medal when he won gold at the Stockholm 1912 with Great Britain's eights team, followed by silver in the same event in Antwerp 1920. Manx competitors have represented Team GB at the Summer Games ever since including the Isle of Man's first female Olympian, swimmer Alexandra Jackson, at Mexico 1968, and 'Manx Missile' Mark Cavendish MBE, who took part in both the Beijing 2008 and London 2012 Olympic Games.

Record breaking shooter and double Commonwealth Games medallist, Manxman Tim Kneale, will be making his Olympic debut at Rio 2016, and a number of other Manx competitors including Cavendish, Kennaugh and Ben Swift remain Team GB hopefuls for the Games.

Samuel Day, Licensing & Retail Manager of British Olympic Association said: "Postage stamps offer an iconic and unique opportunity to mark memorable moments in time and there's no better sporting stage to do so than Team GB's participation at the Rio 2016 Olympic Games. We are hugely proud to do just that with this officially licensed stamp offering from the Isle of Man Post Office."

Maxine Cannon, Isle of Man Post Office General Manager said: "With the Island's strong connections to the Rio 2016 Olympic Games the post office saw it only fitting that we produce a set of stamps in recognition of our participation in this wonderful sporting event. On behalf of the Isle of Man Post Office I would like to send our very best wishes to the Team GB athletes who will be heading to Brazil for the Rio 2016 Olympic Games."

To view the stamps and to order please click here