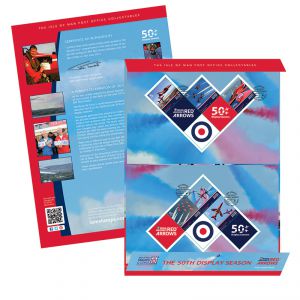 In February, the Isle of Man Post Office issued six stamps marking the 50th display season of the Red Arrows. Special sheets featuring those stamps were carried on board the famous aircraft of the Royal Air Force's world-famous aerobatic display team when they entertained fans at the Isle of Man TT in June.

The flown sheets are individually postmarked with special cancellations commemorating the displays over the town of Ramsey, in the north of the Isle of Man, and the Island's capital Douglas on 3rd June 2014.

A very special collectable featuring a sheet flown during each display has now been released to coincide with The Royal International Air Tattoo, which takes place at Fairford in Gloucestershire from July 11th to 13th.

The Tattoo will be the venue for the official celebrations as the RAF Red Arrows mark their 50th display season.

Maxine Cannon, General Manager, Isle of Man Stamps & Coins, said:  'It was a great honour to be able to issue officially licensed stamps celebrating the 50th display season of the Red Arrows, especially as they have been such regular visitors to the Isle of Man.

'We wanted to do something special to mark the official celebrations of this landmark at the RIAT, so in June Squadron Leader Turner kindly agreed to arrange for 500 pairs of stamp sheets to be flown inside the aircraft during the two displays they performed at the TT on 3rd June.

'The two sheets in each commemorative pack, one from the Ramsey display and one from the Douglas display, make up a complete set of our Red Arrows' stamps, but are unique because they have actually flown as part of a display by the celebrated Red Arrows.'

The special flown stamp sheet set, costing £15.00, can be ordered now from www.iomstamps.com.