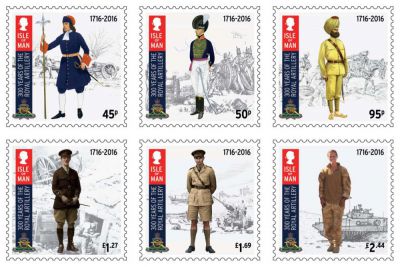 Isle of Man Post Office is delighted to be involved in welcoming the Captain-General's Baton, as part of its world circumnavigation, to the Island next Monday (9th May).

The baton has been touring the world via the countries of the Commonwealth and Allied Artillery countries and those most significant to the Royal Artillery's 300-year history, since it started from Woolwich in May 2015. Its phenomenal journey will come to an end with the delivery of the baton to Larkhill on 26th May, however not before a trip to the Isle of Man. A message of Loyal Greetings to The Queen, who is the Royal Artillery's Captain-General, is contained within the baton.

On Monday, the Isle of Man will play host when it will visit all corners of the Island culminating in a farewell reception at the Manx Legion Hall in Douglas where Chairman of Isle of Man Post Office, Ray Harmer MHK, will present a framed set of newly launched Royal Artillery stamps to Lt Colonel LM Forbes RA. The new set of stamps which mark the Royal Artillery's 300-history will be launched earlier in the day when the baton arrives at Ronaldsway Airport to a military fanfare reception.

Isle of Man Post Office is working in conjunction with the Isle of Man Royal Artillery Association to welcome the baton.

As part of its visit, the baton will be taken to the heights of Snaefell and to the top of the Laxey Wheel. The latter will be conducted by Major Kate Philp, the first British female to lose a limb in combat who will be visiting the Island especially for the day. She will be accompanied by the Chairman of Isle of Man Post Office and a uniformed postperson. Major Philp features on one of the new stamps during her tour of Afghanistan in 2008. Also featured are two Manxmen who fought in conflict representing the Royal Artillery: Major J R Drinkwater and Lieutenant Cowley.

During Kate's whistle-stop visit, she will be the key note speaker at a ladies luncheon being held for some of the Island's business women hosted by Isle of Man Post Office. Kate will draw on her extensive experience in leadership and communication from her time in the military, as well as key lessons she has learned from dealing with a life-changing injury. Kate applies her drive and enthusiasm for personal development to help people and organisations to release their potential.

Chairman of Isle of Man Post Office Ray Harmer MHK said: "I am delighted that Isle of Man Post Office is involved in what will be a very special day for the Isle of Man's Royal Artillery Association. We are equally looking forward to hosting modern day hero Kate Philp for the day where she will be helping to promote the new set of stamps as well as tell her story of determination and bravery at a ladies luncheon."

Instrumental in coordinating the visit on the Island is Honorary Colonel Charles Wilson who is delighted Isle of Man Post Office is involved with the baton's visit.

He said: "The involvement of the Isle of Man Post Office's Stamps & Coins department was central in persuading the Royal Artillery to include the Island in the world-wide trip of the baton. The visit means so much at a local level and reflects the Island's close association with the Artillery. The stamps will escalate the arrival of the Baton to the Island internationally."

Meanwhile the baton is being brought over by Members of 103 Regiment of Royal Artillery.
Lt Col Lindsey Forbes, the Commanding Officer of 103 Regiment Royal Artillery, said: "It's a great honour to bring the Captain-General's Baton to the Isle of Man on the latest leg of its international journey. The Royal Artillery has strong links with the Island, we are justly proud of the role Manx gunners have played in the Regiment's history, and are now busy training a new generation recruited as part of the British Army's Reserve Forces in the Isle of Man."

Isle of Man Post Office has linked up with Walking with the Wounded to help promote its invaluable charity work with wounded, injured and sick servicemen and women and those who have been physically, mentally and socially disadvantaged by their service. Their logo is featured in the supporting material for the new set of stamps. Indeed Major Philp trekked to the South Pole in 2013 as part of an expedition organised by the charity.

The charity's co-founder and Chief Executive Officer Ed Parker said: "These beautifully designed stamps mark an important historical milestone for 'The Gunners.' It's very good to see today's vulnerable veterans being supported at an event which reflects an illustrious military history."

The Royal Artillery Regiment and the Island's veterans call on all citizens of the Island to come out and support this memorable occasion on Monday.