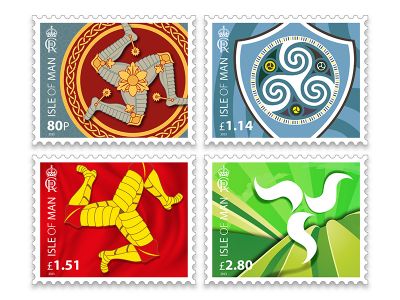 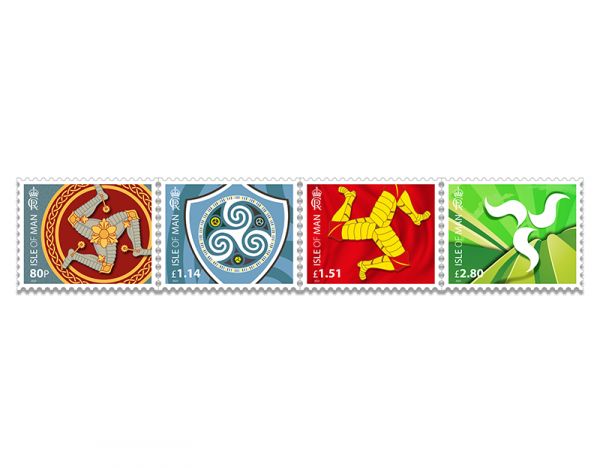 Isle of Man Post Office is proud to issue this set of four stamps, the first to feature His Majesty’s Royal Cypher, showcasing our famous ‘three legs’ triskelion, one of the oldest continually-used national symbols in the world.

The Triskelion, also known as triskeles or triskel, has been the symbol of Manxness for nearly a thousand years and is still to be seen everywhere on the Island, from historical buildings, coins and banknotes to everyday commercial company branding. Everyone identifies with the familiar ‘three legs of Man’. The symbol derived from an ancient sun symbol: the Celtic triskel had various meanings for the early Pagans: it was linked to triadic gods and the three domains of land, sea and sky and was also believed to represent the cycles of life, as well as the Triple Goddess - the maiden, mother and wise woman. It should not be surprising, therefore, to note that the Manx Parliament consists of three divisions – the House of Keys, Legislative Council and Tynwald.

Introduced by Alexander III of Scotland in 1265 the Manx legs were originally bare-legged but, by the fourteenth century, were clothed in armour and golden spurs. The legs are usually seen to run clockwise and the symbol often appears with the Latin motto ‘Quocunque Jeceris Stabit,’ meaning ‘it will stand whichever way you throw it’ – a reference to the independence and resilience of the Manx people, who prefer the version ‘whichever way you throw me, I will stand!’

Laurence Skelly, President of Tynwald said: “Through an extraordinary period of history Her Majesty Queen Elizabeth II reigned with steadfastness, dignity and grace. Since gaining postal independence in 1973, every single stamp issued by the Isle of Man Post Office was approved by Queen Elizabeth II, custodian of the Royal Philatelic Collection. This long lasting relationship formed a unique bond between the Palace and the Island.” He added: “Now that King Charles III, Lord of Mann has acceded to the throne a new chapter begins for the Isle of Man Post Office. I’m delighted that Isle of Man Post Office celebrates this new chapter by joining our Islands well known Triskel and the cypher of HM King Charles III, Lord of Mann on the first stamp issue of 2023.”

Isle of Man Stamps and Coins General Manager, Maxine Cannon said: “Nothing represents the Isle of Man more than its symbol, the triskelion. How befitting therefore that H M King Charles III Lord of Mann should grant his approval to issue the Triskelion Collection as our first set of Isle of Man stamps to feature his cypher. This is a new era for Isle of Man Post Office and the start of a new chapter in our 50th Anniversary Year.”