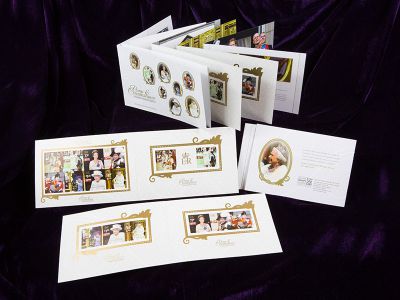 The prestige booklet, coin and other stamps products entitled "Pomp and Circumstance" can be viewed and ordered here.

Her Majesty the Queen was born on 21 April 1926 in London, the first child of Prince Albert, Duke of York and his wife formerly Lady Elizabeth Bowes-Lyon. Third in line for the throne it seemed unlikely that Princess Elizabeth would be Queen. However, following the death of George V, the new King - her uncle Edward VIII - abdicated to marry American divorcee Wallis Simpson and her father George VI became King. Following her father's death on 6 February 1952, she immediately took the throne and was crowned Queen Elizabeth II at Westminster Abbey on 2 June 1953. In 2007 Queen Elizabeth II became the longest-lived British Monarch and today is set to surpass her great-great-grandmother Queen Victoria as the longest reigning British Monarch.

As well as being Queen of the United Kingdom and Head of the Commonwealth, Her Majesty is also Lord of Mann and has strong links both directly and through Lieutenant Governor Adam Wood. She has visited the Isle of Man on many occasions, the first being 1955 and the most recent being 2003.

To commemorate her dedication in service across the United Kingdom, Commonwealth and Isle of Man the Post Office is pleased to present a beautiful compact 24 page high gloss, gold foil finished prestige booklet which features vibrant images and two full sets of stamps depicting significant milestones in Queen Elizabeth II's long reign including Her Majesty's Coronation, The Investiture of Prince Charles, Trooping the Colour, The Diamond, Golden and Silver Jubilees, Opening of Parliament and Order of the Garter. This is complimented by two written celebrations, one by Claudia Joseph that marks her time as Queen and Alan Cooper writes about her role as Lord of Mann during her reign.

Maxine Cannon, General Manager of Isle of Man Stamps and Coins said: "Such a long and prestigious reign can only be celebrated in such a way. We are delighted to present this prestige booklet, Isle of Man Treasury coin and other stamp products for anyone who wants to celebrate such an important figure in British history."

The prestige booklet, coin and other stamps products entitled "Pomp and Circumstance" are available at iompost.com and can be viewed and ordered here.