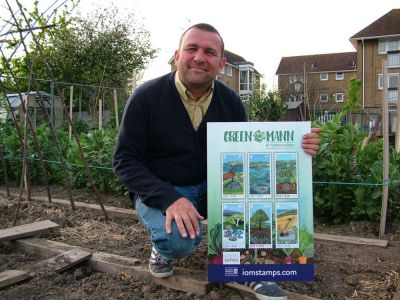 Isle of Man Post Office is pleased to present a set of six stamps which have been designed by Manx artist Nicola Dixon. The stamps celebrate the Island's landscape, horticultural, farming and fishing heritage which has encouraged a rich and growing diversity of contemporary food producers on the Isle of Man. The collection is due for release on 3rd May 2017.

The issue has accompanying text by Chris Collins, former Blue Peter head gardener and who more recently appeared as a judge on 'Young Gardener of the Year' and presented his own BBC4 documentary 'Wonder of Weeds'. Chris highlights the benefits of local produce and describes the Isle of Man as a treasure trove in this regard due to the abundance of fruit orchards, fresh fish, farm products and fresh veg. He enthuses about the use of the stamps to promote and educate the Island's population about its own locally grown produce and the benefits it provides.

In supporting Chris' views, the Isle of Man Government has its own Food Matters strategy, which promotes the growth of the Island's food and drink sector and assists businesses to start up and expand. For centuries, farmers, growers and fisherman have shaped the diverse landscape and rich heritage of the Island, which has seen consumers' ever increasing purchase of local produce and farmers and food producers become more entrepreneurial. In 2016, 28 UK Great Taste Awards were won by 13 different Manx businesses ranging from fresh meat, ale and cheese, to bread, flour and spices.

The six stamps in the collection feature artist Nicola Dixon's bright distinctive style interspersed with her use of Celtic interlace and spiritual elements, notably the triskel, a triple spiral and complex Celtic symbol which is often referred to as a triskelion. The first stamp, 'Farm to Yarn', shows the native Manx Loaghtan sheep standing on a rock with a triskel design. The second stamp, 'Fish to Dish', highlights the fishing industry of the Island and the rich rewards that are found in its waters. The third stamp is called 'Welly to Belly' and depicts vegetables that are grown locally. The fourth stamp, 'Cow to Cup', has a table of dairy products produced on the Island from local cows. The penultimate stamp, 'Tree to Table', reflects the abundant orchards of the Island and the deep roots of the trees on the land. The final stamp, 'Field to Fork', depicts a combine harvester farming the fields and the produce that comes from it.

Commenting, Chris Collins, said: "It's a privilege for me to be asked be a part of this wonderful project. Not least to promote and let the world know about the excellent fresh produce currently being produced by the Isle of Man but also to be working with such a friendly Island and its generous people."

Isle of Man Stamps and Coins General Manager Maxine Cannon, said: "We are delighted to be able to showcase the Island's rich heritage and contemporary food industry in this collection. We'd like to thank Chris Collins for his fantastic endorsement of the Island's food industry and Nicola Dixon for her stunning artwork that brings the meaning of the industry to life."

The Green Mann stamp issue can now be pre-ordered now at www.iompost.com/greenmann.