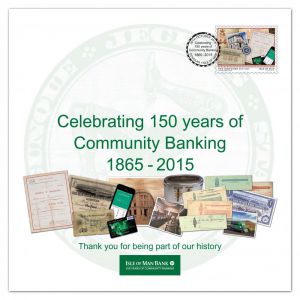 To view and order the stamp collection click here

The Isle of Man Bank presented the unique gift envelope to their colleagues and key clients that were invited to a celebratory evening. The gift features one of a set of six stamps produced to celebrate some of the oldest continuously trading companies on the Island, as well as a special anniversary postmark to commemorate the anniversary date - 26th October 2015. Following the promulgation of the Companies Act in 1865, 'The Isle of Man Banking Company Ltd' as it was first known, came into operation on 26th October 1865 and was incorporated as registered company number one under the then new Manx Companies Act before commencing trading on 1st November 1865.

The Post Office also recently assisted with the branding and design for the Isle of Man Bank's lasting legacy tree planting day which took place in Ballaugh during September.

Bill Shimmins, Managing Director, Isle of Man Bank said: "We wouldn't be able to celebrate such a significant milestone without our customers and the support from the wider community and for that, we thank you. If you look at how banking has changed over the years, we really have been on a remarkable journey, but what has not changed is our determination to support our customers achieve their ambitions. We look forward to what we hope will be another 150 years."

Graham Cregeen MHK, Chairman, Isle of Man Post Office said: "We were delighted to help Isle of Man Bank celebrate its 150th birthday and memorable anniversary as the first limited company incorporated on the Island. The Isle of Man Bank has been a long-standing client of ours for many years and likewise we have to them. The opportunity to feature our recently released Companies Act stamp issue was a fitting way for us to be able to produce a special keepsake gift for their colleagues and key clients to mark this significant milestone in the bank's history."

To view and order the stamp collection click here