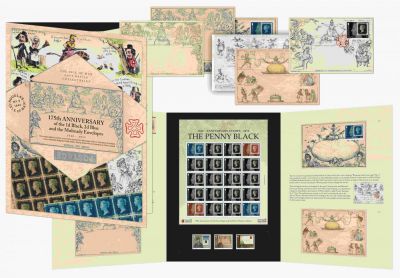 Isle of Man Post Office in conjunction with Mulready Philatelics is pleased to present a striking limited edition compilation for collectors of postal stationery. This unique folder which is due for release on May 6 celebrates the 175th Anniversary of the Penny Black, Twopenny Blue and Mulready Envelopes.

As part of Rowland Hill's uniform postage reforms from 1839-1840, a national Treasury Competition was held for the public to suggest ideas for postal 'covers'; several entries were received for the prepayment of postage. Over 2,600 entries were submitted by the public, including ideas from James Chalmers, Charles Whiting and William Mulready. In his report that followed, Hill decided that postage should be prepaid by means of stamped covers, stamped envelopes and adhesive labels.

The Penny Black and Twopenny Blue adhesive stamps, or 'labels' as they were known, were released for sale on May 1, 1840, valid for use from May 6.

At the same time the Post Office also commissioned postal stationery lettersheets and envelopes designed by William Mulready RA and these went on sale at the same time as the stamps and were valid for postage from May 6, 1840. These were sold at 1¼d and 2¼d respectively. The elaborately illustrated lettersheets were cut into rectangles, folded over and sealed or tucked in. The envelopes of the same design were pre-cut to a diamond or lozenge shape and folded to form a rectangular enclosure that could be held together by a wax seal at the apex of the topmost flap. The plates for the Mulready lettersheets and envelopes were engraved by John Thompson and printed by William Clowes on security, silk-thread cream paper made by John Dickinson. Two values were issued; the 1d printed in black and the 2d printed in blue.

It was perceived by stationery manufacturers that their livelihood was threatened by Mulready's newly issued lettersheets and envelopes. Consequently they were widely caricatured, or lampooned, and the official Mulready stationery had to be withdrawn and replaced swiftly; the 1d pink was introduced the following year. However this was not before a number of eminent caricatures and printers of the time had come up with designs that viciously parodied the Mulready, and they proved extremely popular throughout the rest of 1840.

Robin Cassell of Mulready Philatelics said: "6th May 1840 is the most important day in philatelic history - the issue date of the first stamps, the Penny Black and the Twopenny Blue, together with a prepaid envelope and lettersheet of the same values by the Irish artist William Mulready. The Isle of Man Post Office have produced a wonderful set of six stamps to commemorate the 175th Anniversary of this historic date, together with a set of six envelopes accurately producing both the Mulready envelope and contemporary caricatures by artists such as John Leech and Dickie Doyle that ridiculed the design, which was seen as inappropriate by the Victorian public. Now we appreciate these items for their true beauty and classic design, and they remain highly collectable to this day."

Mike Southall MBE MCGI said: "The first postage paid envelopes and lettersheets were introduced by William Mulready RA. They were expected to be standard method of prepayment of postage but were very much ridiculed by the general public and there were a number of satirical caricatures made of Mulready's designs. As a result postage stamps took precedence and still remain today."