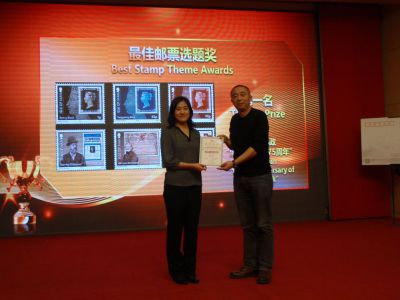 This special set of stamps, produced in collaboration with the highly acclaimed rare stamp merchant Stanley Gibbons Ltd., celebrate the 175th Anniversary of the Penny Black, the world's first adhesive posting stamp used in the public postal system, and the birth of Edward Stanley Gibbons.

This Penny Black stamp set was the winner of the "Best Stamp Topic Selection Award" and the first runner-up of "Best Stamp Design Award" at the 12th China Annual Best Foreign Stamp Poll organised by the Association for Promotion of West China Research and Development. An award presentation ceremony was staged in Beijing.

Maxine Cannon, Isle of Man Stamps and Coins General Manager, said: "Our Penny Black commemorative stamp set is a must-buy collection of philatelists worldwide, not just because of its beautiful design, but also its enormous historical significance – Penny Black marks the birth of the modern British postal system. We are most pleased that this stamp set has been recognised in China."

Maxine added: "Steven Beevers Head of Special Projects at DED has provided us with great assistance in actively promoting this and other stamp issues in China via the local media and micro blogging site Weibo and we'd like to thank him for all his support."

Six stamps have been produced and include depiction of the Penny Black, the Penny Red which replaced the Black and the TwoPenny Blue. In addition, there are three stamps each with a key individual - William Mulready, Rowland Hill and Edward Stanley Gibbons whose portraits are featured on the stamps next to their associated contribution.

The stamps are available in mint condition and cancelled to order as well as featured on a collectable first day cover and in a presentation pack. There is also a commemorative crown, which features an image of the Penny Black showing Wyon's classic portrait of the teenage Queen Victoria.

The history of Penny Black stamps could date back to the 19th century. Postage rates on the Isle of Man and the rest of the British Isles had risen to a very high level by 1830 and as a result a campaign to reform these was led by Roland Hill with the main aim of lowering the rate to one penny per half ounce. This in addition to introducing a method to signify if a letter had been pre-paid was developed by William Mulready. The first step towards a change in the postal system then occurred on December 5, 1839 when the rate was reduced to four pence. This was a success and the penny rate was introduced January 10, 1840. At first the postage paid or due was written in ink on the letter by the postmaster and then on May 6, 1840 a new method of paying postage was introduced and the famous Penny Black was born, followed by the TwoPenny Blue on May 8, 1840.