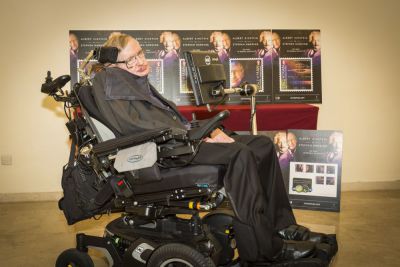 The Isle of Man played host to Professor Hawking back in August 2012. Whilst on the Island, he went on the steam train, arriving in Port Erin where he joined in with the 'Island at War' celebrations.

After obtaining degrees from Oxford and Cambridge Universities Professor Hawking was for 20 years the Lucasian Professor for Mathematics at Cambridge University and Founder of the Centre of Theoretical Cosmology. Hawking has spent his career understanding gravitation and space-time. His research is focused primarily on cosmology, black holes and string theory, and he has devoted his time to supervising research students, conducting workshops around the world and leading seminars often based around ground breaking papers. In 1982 Professor Hawking was awarded a CBE by the Queen and then in 2015 the Stephen Hawking Foundation was established to further research cosmology, motor neurone disease and to facilitate those working in these areas and their care.

Professor Hawking is arguably the most brilliant theoretical physicist since Albert Einstein and certainly the most famous scientist of modern times. These two great minds have contributed so much to our understanding of the cosmos.

This stunning stamp issue contains six images showcasing the works of Albert Einstein and Stephen Hawking and the supporting material contains text prepared by Cambridge University experts and Professor Hawking. Each stamp uses a rare iridescent foil printing technique on the words 'Isle' and 'Man' and the Queen's head along with warm earthy colours to create a scientific and atmospheric look and feel to the collection. The first stamp image is of Einstein with his iconic equation E=MC2, the theory of relativity. The second stamp image features Professor Stephen Hawking and his entropy of blackhole equation, S=¼A. The third stamp depicts an illustration of gravitational waves powered by two colliding black holes. The fourth stamp is an illustration of Hawking Radiation which is produced by black holes. The fifth stamp features an illustration of two black holes colliding. Finally, the sixth stamp features an illustration of a black hole showing how it is bent to form a bottomless pit that matter can fall into but not escape from.

Stephen Hawking endorsed the stamps and said: "I am honoured to have both my face and life's work featured alongside Albert Einstein and the commemoration of 100 years since the publication of his theory of general relativity.

This limited edition collection of six stamps, created in collaboration with the Isle of Man Post Office and Glazier Design, displays some of the equations over the past century that have led to significant scientific discoveries and, in turn, have had a profound impact on the world.

Much of my life's work has been to encourage young people in the study of cosmology and astrophysics and to help inspire them to better understand our universe and beyond. I hope that this unique set of stamps goes some way towards achieving this."

Maxine Cannon, Isle of Man Stamps & Coins General Manager said: "Isle of Man Post Office is extremely humbled and proud to have been chosen by Professor Stephen Hawking to celebrate his life's work through our stamp issue that marks 100 years of general relativity including the works of Einstein. However none of this would have been possible without the foresight of Ben Glazier and his team, Elizabeth Forrester of the Stephen Hawking Foundation, Greenlight who represent the personality rights of Albert Einstein and all my team at Isle of Man Post Office.

The Isle of Man Post Office will do everything it can to ensure the stamps are known and appreciated worldwide and that they act as an inspiration for all who see them, to explore our world further."

Isle of Man Chief Minster Allan Bell CBE MHK, commented: "The Isle of Man Post Office has a well-deserved reputation for its ability to create truly extraordinary products that appeal to collectors around the world. This innovative set of stamps commemorating the work of two renowned physicists is no exception.

Professor Albert Einstein and Professor Stephen Hawking have made outstanding contributions to the world's understanding of the universe around us. Einstein's theory of general relativity may be a century old, but it is fundamental today to the operation of such features of our daily lives as GPS and satellites. In addition to Professor Hawking's ground-breaking research his ability to make science exciting to the general population deserves to be celebrated as well, as these stamps do."

Notes to Editor:
• Image embedded and attached of stamps. Also attached is an image of Brian Cox and Stephen Hawking with the stamp blow ups
• The stamps are available as a set, sheetlet, first day cover, presentation pack, prestige booklet and framed collectible. To register your interest please contact Isle of Man Stamps and Coins
• Keep up-to-date with the latest news on Twitter: @IOMstampscoins
• Please visit our Media Centre where you can freely download copy, latest news, copyright free and approved images http://www.iompost.com/media-centre/login/
• Visit www.stephenhawkingfoundation.org for more information or to contribute to the Stephen Hawking Foundation
• Personality rights of ALBERT EINSTEIN are used with permission of The Hebrew University of Jerusalem. Represented exclusively by Greenlight www.greenlightrights.com
• To read more about gravitational waves please visit - www.iflscience.com/space/do-gravitational-waves-hint-at-dark-matter/