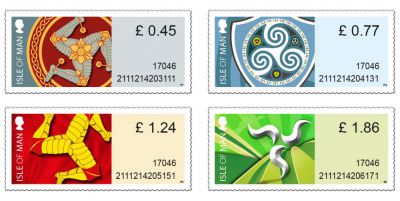 Isle of Man Post Office is pleased to mark the development of its new variable rate definitive self-adhesive stamps service to collectors with the release of its first stamp set, The 'Treskilion Definitives'. The new service which is part of the stamp issue programme will be launched on Wednesday 15th February at the Post Office's stand at Spring Stampex held in London's Business Design Centre.

• The Treskilion stamp issue are a set of four stamps which are part of the post office's normal issue programme and will be supplied in accordance with standing order requirements for commemoratives.
• The set of four stamp designs will be available as collector items – mint/cto set, first day cover and presentation pack.
• They will be vended via the post office's retail kiosks, post office counter network and via hand held vending machines at one off events such as stamp exhibitions.
• The withdrawal policy will match the post office's current issues.
• The minimum value supplied for collector purposes is the 1st class postage rate up to 100gms prevailing at the time of request – currently 45p
• The stamps will form part of the post office's year collections and will feature in its 2017 Lindner pages as a strip of four.

Since the introduction of the adhesive postage stamp in 1840 ways have been sought to make it easier to buy these and show that the postal charges have been paid. Among these solutions have been stamp vending machines and stamp books. Perhaps the biggest change has been the ability to buy stamps or post an item using a self-service kiosk or machine.

The Isle of Man introduced its first Pay & Post kiosk onto the Island in 2010 and now has a network of 10 in operation across the Island. The machines which are a quick and simple way to conveniently pay bills and buy postage have until now provided simple blank adhesive labels detailing the postage paid at the time of transaction. Working with technology partner, Esher, Isle of Man Post Office has now developed a solution that allows the printing of pictorial self-adhesive stamps of varying values.

The stamps which are highly collectible include a value, the five digit date of issue, a sequential number and stamp identifier which indicates where the pictorial stamp has been issued on the Isle of Man.

The first set of variable definitives features four highly attractive designs based on the Island's national emblem, the Three Legs of Man. The four images show the three legs that appear in Douglas Town Hall, a triskelion design that incorporates smaller visuals of the Millennium of Tynwald three legs, the three legs as seen on a quayside building in Castletown and a new modern interpretation of the Three Legs of Man.

The origins of this ancient motif have been forgotten over the ages however it's thought to have been introduced to the Isle of Man by Alexander III of Scotland once he gained control of the Island in 1265. Alexander had family connections with Sicily, which adopted a three-legged version of the symbol, the triskelion, hundreds of years previously. The legs usually run clockwise and carry the Latin motto 'Quocunque Jeceris Stabit' meaning 'whichever way you throw me, I stand', a reference to the independence and resilience of the Manx people.

Stamps & Coins General Manager, Maxine Cannon, said: "We are delighted to present our new variable rate definitives and promote our national symbol on and off Island to a wide audience through mail items which are delivered worldwide. Pictorial stamps are extremely popular among stamp enthusiasts and the interest in these types of products continues to grow. We are excited to be able to offer our first of many variable definitive stamps which complements our existing stamp collections and marks our heritage using the national symbol."

The 'Triskelion Definitives' issue can be pre-ordered now at www.iompost.com or purchased at Douglas Headquarters Pay & Post kiosk and Isle of Man Stamps and Coins stand (stand 78) at Spring Stampex from 15th February.