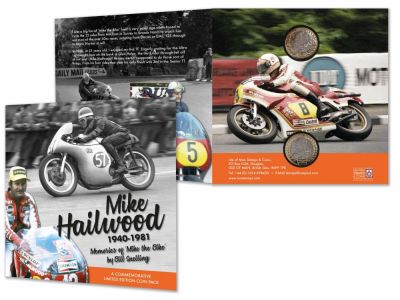 Isle of Man Post Office (IOMPO) is proud to announce the release of a limited edition commemorative coin pack to mark sixty years since fan favourite Mike Hailwood first raced the Isle of Man TT and forty years since he returned to the event. IOMPO has further announced that numbers 40 and 60 from these limited number of only 500 packs will be gifted to Mike's wife Pauline when she visits the Island for the Classic TT this August, an event that she says she is very much looking forward to.

Mike Hailwood secured fourteen Isle of Man victories and nine World Championship titles during his eighteen year racing career and was regarded by many as the greatest rider ever to race the Mountain Circuit. His return to the TT in 1978 after an eleven year break has been described as 'one of the most emotional moments of 20th century sport'.

To mark this special year for motorsport, the Isle of Man Treasury with the support of the Mike Hailwood Foundation has officially licensed two new Brilliant Uncirculated £2 coins, each making reference to Mike Hailwood's legendary Ducati. These are now available as a set in an illustrative folder, providing fans with wonderful images of the road racing champion, and also fascinating text written by Bill Snelling entitled 'Mike the Bike'.

Priced at just £25, there are now very limited numbers available, with the remaining expected to sell quickly amongst racing enthusiasts.

Upon hearing the news, Pauline Hailwood said 'I would like to express my sincere thanks to the Isle of Man Government for celebrating Mike's special anniversary at this year's 'Classic' TT. Also for honouring him with the production of two specially minted coins to mark the event, he would be so pleased. The coin packs are a beautiful memento of the occasion, which I am sure, will be very popular with Mike's fans'

The Mike Hailwood Commemorative Coin Pack is available to order from www.iompost.com/hailwood or by telephone + (44) 1624 698430.