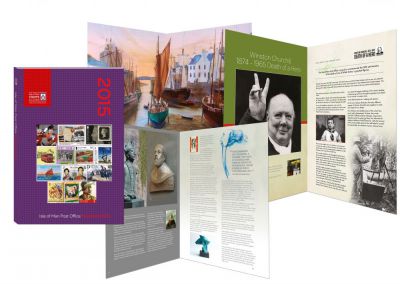 To view the 2015 Yearbook, year collection and to pre-order please click here.

Isle of Man Post Office is pleased to present its 2015 Yearbook, the ideal gift for friends and family. It is packed full with 86 stamps and four miniature sheets released during the course of 2015, together with insightful text and stunning high definition images to accompany each collection.

Limited to just 1000 copies, this hard-backed book contains a diverse range of themes from local heritage, postal history and art to historical milestones. It contains 16 fascinating chapters that range from the commemorative to celebratory and includes Isle of Man Post Office's releases for the WI centenary anniversary, Chinese Year of the Sheep, the 70th anniversary of WWII, Manx Buses - Part Two and Winston Churchill – Death of a Hero.

During the year, Isle of Man Post Office was especially proud of its collaboration with Waterloo 200 to celebrate the bicentenary of this most famous of the battles with the creation of a set of eight special stamps and other collectables depicting the main features of the battle from both sides.

Another notable collection during the year has been a set of eight stamps, produced to celebrate the long reign of Queen Elizabeth II, who on September 9 at 5.30pm surpassed her great grandmother Queen Victoria to become Britain's longest reigning monarch, the stamps depicting some of the Queen's most important ceremonial occasions in Her Majesty's reign.

On a more local level, Isle of Man Post Office produced a set of six stamps using images captured by the Isle of Man Photographic Society of six of the world's most endangered species conserved at the Island's popular local attraction, Curraghs Wildlife Park. The stamps marked the wildlife park's 50th anniversary.

This year also marked the 175th anniversary of the Penny Black, the world's first adhesive stamp used in the public postal system, and Isle of Man Post Office was proud to join together with Stanley Gibbons to present a modern day set of 175th anniversary Penny Black stamps to mark this important date, signifying the birth of the modern British postal system, which is now used around the world today. Linked with this significant milestone, on the anniversary date of the original Penny Black stamp, May 6, Isle of Man Post Office opened a wonderfully curated 'Small Wonders' exhibition at the Sayle Gallery in Douglas, Isle of Man, where it exhibited a striking interpretation of 175 years of postal history on the Island.

This highly collectable full colour hardback book is an essential to any collector or historian, bringing together every 2015 stamp issue and miniature sheet in one place. The issue stories are told in greater detail than elsewhere with much wonderful exclusive content and expert commentary. There are stamp mounts integral to each chapter to accommodate the complete mint collection for the year which is included in this handsome limited edition volume. The price of the book reflects the total face value of the stamp content. Don't miss out - get your copy in time for Christmas, before stocks run out!