Isle of Man represented at Battle of the Somme commemorations 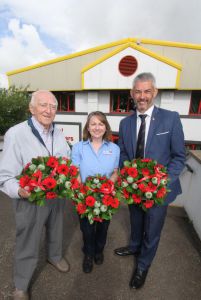 The Isle of Man will be represented at two national events to mark the centenary of the Battle of the Somme.

Chief Minister Allan Bell CBE MHK will be a guest at the commemoration taking place on Friday 1 July at the Commonwealth War Graves Commission Thiepval Memorial in Northern France.

The event is being led by UK Department for Culture, Media and Sport and the French Mission du Centenaire de la Premiere Guerre Mondiale.

Howard Quayle MHK, Minister for Health and Social Care, will attend the National Commemoration of the Battle of the Somme at Manchester Cathedral, also on Friday. The service will be preceded by a March Past at Albert Square and a two-minute silence at the Cenotaph in St Peter's Square.

The Battle of the Somme, fought in Northern France, was one of the bloodiest of World War One. Starting on 1 July 1916, the British and French armies engaged the Germans in a brutal battle of attrition that lasted almost five months and resulted in the loss of more than one million men on all sides.

The Chief Minister said: 'The Battle of the Somme is synonymous with the great sacrifice made during World War One. There is no doubt that without the men who fell in this terrible conflict a century ago, our lives today would be very different. It is important to remember each individual and I will be paying my respects on behalf of the Isle of Man at the commemoration in France.'

The names of Manxmen taken from various rolls of honour indicate that 120 were killed during the 141 days of the Battle of the Somme.

Minister Quayle added: 'The Isle of Man played an important role in World War One, supplying troops and vessels and running special camps for the internment of enemy aliens. Many Manxman died alongside their comrades on the battlefields in Northern France and the national commemorations provide an opportunity to reflect on their deeds.'

Isle of Man Post Office is also involved with the events having issued a set of stamps to mark the centenary of the Battle of the Somme as part of its continuing commemoration of the 100th anniversary of World War One.

A special sheetlet will be officially issued on Friday 1 July, which presents the set of six stamps from the Battle of the Somme collection. This product, along with the other collectibles, will feature in the Thiepval Visitors Centre. Maxine Cannon, General Manager of Isle of Man Stamps & Coins, will also make a presentation of the stamps to the Albert Town Hall and to the Museum of the Great War at Peronne.

Maxine said: 'We will have a presence in the Albert Town Hall, working with the local philatelic club to offer our Somme stamps and special postmark. On 2nd July at a service of remembrance I will have the privilege of laying a wreath for the fallen of Isle of Man Post Office and in memory of those who served. It is an honour to be involved and to have worked with local members of the Manx Legion, including Hector Duff BEM and the Royal British Legion Somme Commemoration Team.'