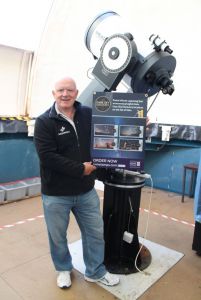 The Isle of Man now has a total of 26 Dark Sky sites, which is by far the greatest concentration of such sites in Europe. 19 sites were recognised in January 2014, which were in addition to the seven that were similarly granted this prestigious status by the Dark Sky Discovery Network (DSDN) based at the Royal Observatory in Edinburgh during October 2012.

Dark Sky Status is granted only to sites that have spectacular views of the night sky. One of the criteria for Dark Sky Status is the ability to see the Milky Way clearly on dark clear moonless nights, which is known in Manx as "Raad Mooar re Gorry" or the great way of King Orry, commemorating the landing of King Orry in the late 11th Century. The Isle of Man has many such locations, which have now been formally acknowledged by the DSDN and by many visiting astronomers.

Nicole Stott, NASA Astronaut and wife of Manxman Chris Stott gave her full support to the application for the original seven sites with the following quote: "I tried on many occasions to identify the Isle of Man from orbit, but I had great difficulty because it is so dark! I eventually captured an image and it shows how wonderful the night skies in the Island are. The Manx skies are fantastic for astronomy – great from above, on board the ISS (International Space Station) and from below, on the Island."

The stamp issue has been produced following consultation with Howard Parkin FRAS of AstroManx and the pictures used on the stamps show spectacular images of the Manx night skies and feature some of the constellations clearly visible throughout the year from the Island's darker skies. The stamps show four Dark Sky scenes taken from various locations on the Island across the seasons with one or more constellations superimposed on each. The stars as well as the surround of each stamp are distinct in that they are metallic, an essential collectable for all philatelists and astronomy enthusiasts.

Dan Hillier, Leader of the DSD initiative at the STFC's UK Astronomy Technology Centre in Edinburgh, said: "It's gratifying that the Dark Sky Discovery Sites have led to the commissioning of these Isle of Man stamps. The dramatic views of the Manx night skies are truly impressive, so having them captured on a set of stamps is a great accolade for the island and for the Dark Sky Discovery initiative."

Howard Parkin BSc FRAS said: "I was delighted to be able to help Isle of Man Stamps & Coins produce these beautiful stamps. They show just how clear the Manx night skies can be, and each stamp shows a different view of just what can be seen from our Dark Skies throughout the year and as such they can be used as a mini star atlas, which we believe may be unique from a philatelic viewpoint."