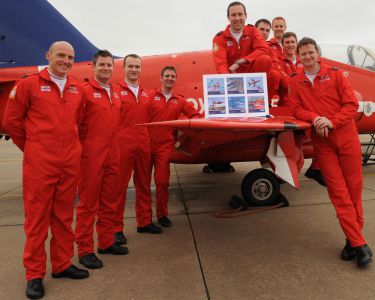 Isle of Man Stamps and Coins is pleased to present a set of six stamps celebrating the 50th display season of the Red Arrows. Due for release on February 19th, the celebratory anniversary pack comes complete with six stamps that depict the speed, agility and precision of the world-famous Red Arrows synchronised acrobatics team.

The Red Arrows is the public face of the Royal Air Force and have thrilled thousands of fans and spectators with displays around the globe, including the Isle of Man. The team is a core part of the Royal Air Force and its pilots have previous combat experience in various theatres across the world.  Each individual both male and female contributes to maintain the team's position and it's a world leader in its class. To date the team has performed over 4500 displays worldwide in 55 countries.

The stamps depict the Red Arrows squadron in its signature formations around the world including its trade mark diamond nine formation and show the famous red, white and blue smoke trails left behind.

This postal tribute created in association with the Ministry of Defence offers high definition photography with vibrant images and a high quality finish to create a fitting celebration of the Red Arrows 50th display season.

Maxine Cannon, General Manager Isle of Man Stamps and Coins said: "The stamps look fantastic and frame the images of the planes perfectly. We are delighted to be able help the Red Arrows celebrate its landmark 50th display season with this commemorative set and to be able to add these to our portfolio of stamp collections."

Squadron Leader Jim Turner, Team Leader of the Royal Air Force Aerobatic Team, the Red Arrows, said: "The stamps beautifully capture the images of the jets, the sky and the countless audiences who have enjoyed the displays performed by the team around the world.

"Those pictures used in the design of the stamps demonstrate speed, precision and dedication – which are not just hallmarks of the Red Arrows but also of the Royal Air Force as a whole.

"The stamps also help celebrate what will be a very special 2014 for the Team – our 50th display season.

"This is a milestone moment for a Team that represents the United Kingdom, the values of the Royal Air Force and helps promote British industry."

He added: "We are impressed with the way Isle of Man Stamps and Coins have presented the pictures of the jets and the aerobatics.

"The Isle of Man has often been a date in our display calendar, involving the TT celebrations, and is an event we look forward to.

"We hope people will share our pride and enjoyment when you watch us perform during 2014 and we would like to thank you for your continued, and valued, support."