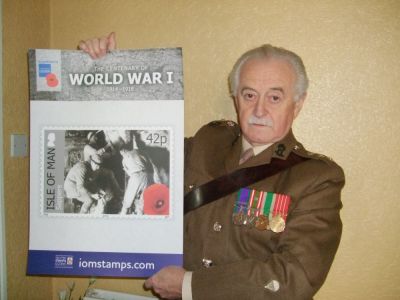 To commemorate the landmark centenary anniversary of World War I (WWI) Isle of Man Stamps and Coins has linked up with the Royal British Legion to produce a set of six stamps depicting life in the trenches. This sheet is part of the four year series stretching from 2014 to 2017 to mark the period of WWI.

The Royal British Legion has clear links with WWI and is a UK leading service charity that helps serve members of the Armed Forces, veterans of all ages and their families. It is also responsible for the centenary poppy appeal campaign in commemoration of all those who lost their lives in the First World War.

The stamps show the original black and white images with the Royal British Legion red poppy displayed as a symbol of remembrance. The six images used in the issue reflect and depict life in the trenches – communications, war horses, sappers that dug tunnels under the trenches, the trenches, the officers' dugout and Christmas truce.

In the accompanying text, noted military Colonel Charles Wilson provides a detailed account of Trench Warfare, and the Isle of Man's role within WWI. The text builds a picture in the mind's eye of the way in which the war fought, and how the Isle of Man was involved both at home and in the trenches.

The Manx contribution to WWI manifested itself in many ways both at home as guards to the internment camps and abroad in the various theatres of war. On 6th March 1915, Volunteers of the 1st Manx Service Company marched from the old Drill Hall, Douglas and embarked on the Isle of Man Steam Packet to form distinct Manx units in the Cheshire and King's Liverpool Regiments. Their service was mainly in France, by which time the trenches were dug and the armies faced each other.

Commenting on the stamps and the link up with the Royal British Legion Colonel, Charles Wilson said: "The stamps are moving and really represent the scenes of Trench Warfare. The images depict the squalor and something of the humour of what was going on, humour of the British solider, quite repressible and the images of the animals which played such a vital part. The poppy links the war with the current work of the Royal British Legion."

He goes on to say: "Here on the island the Royal British Legion holds pride of place amongst the regions by collecting more money per head of population than anywhere else on the British Isles."