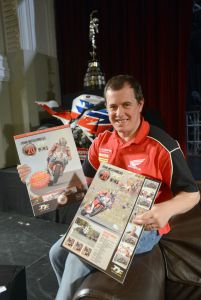 As part of his birthday celebrations the team presented John with a cake which resembled the newly released stamp sheet, a special TT Grandstand postmark for the 16th April, and a birthday card. The stamp sheet features legendary road racing champion McGuiness in action, along with vibrant photos bursting with colour and a list of his victories so far in the form of his first 20 wins over the last 15 years. The sheet is a treasure trove of action photos from his career which have all been provided by road racing photographer Stephen Davison. In addition to the stamp sheet Isle of Man stamps and coins have produced a stunning limited edition booklet of just 1000 numbered copies which contains the sheet of stamps, brand new Isle of Man 50p coin and an individually numbered special edition cover postmarked with John's birthday which he has signed. The booklet is available at a special order price of £30 until 10th May after which it will revert to £35. All orders of the booklet or sheet will also receive a set of free MGP 100th Anniversary postcards.

The Isle of Man TT Races are unique as there is no other race in the world to compare with the 37.7- mile Mountain Course and its endless corners, stone walls, jumps and telegraph poles that have encapsulated over 100 years of road racing and the legends that have raced through the Manx towns and countryside.

It was over 15 years ago that John McGuiness secured his first TT win, riding the Vimto Honda in the 1999 lightweight 250cc and from there onwards he has gone from strength to strength and last year smashed another barrier, winning a dramatic senior race to take his 20th title.

From 2005 he has been the man to beat on the superbike, winning every Senior TT he has finished and shattering records at every step – the first to lap at more than 128 mph, 129 mph, 130mph and 131 mph, he is outright lap record holder since 2004 with 41 podium finishes, more +131 mph laps than anyone else; the list of accomplishments goes on and on.

Speaking while in the Isle of Man for the media launch of the 2014 TT, John said: "I am thrilled to bits, it has really lifted my spirits. You know you have made it when the Isle of Man Post Office issues stamps in your honour!"

Maxine Cannon, General Manager, Isle of Man Stamps and Coins said: "We were delighted that we were able to announce this commemorative issue of stamps celebrating John's 20 victories on the Mountain course on his birthday by presenting him with a card, a special TT Grandstand postmark and a cake with the amazing images on it. John is a true ambassador for the island, promoting the TT wherever he can, and fully deserves thanks and recognition."