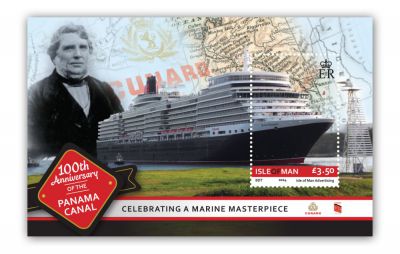 Isle of Man Post Office has produced a miniature sheet that marks the Centenary of the Panama Canal, the incredible feats of the civil engineers tasked with its creation and a series of achievements exemplified by the passage of Cunard's Queen Elizabeth through the world famous waterway. The sheet is due for launch on 8th of August.

The construction of the Panama Canal was first officially authorised by the Spanish Government in 1819, however it's commencement was stalled for some time whilst a number of surveys were undertaken, one of which by Manxman William Kennish, born in Cornaa in 1799 and recognised by The Society of Arts and Commerce as a notable engineer, explorer, inventor, scientist and poet.

Following a number of setbacks, the project was eventually completed by the US Government and the Canal was officially opened on 15th August 1914 with the passage of the cargo ship SS Ancon. Since then, the Panama Canal has averaged 14,000 ships per year, representing 5% of the world's shipping industry, and continues to be regarded as one of the world's busiest waterways. In 2014, we mark 100 years since the first ship sailed its entire length.

Panama will be celebrating its 100th Anniversary by different events throughout the year. These events will focus on the aspects that have led to its international status as well Panama's future. Last but not least Panama celebrates the Canal through its generous and necessary Canal extension, referred to as the 'Third Set of Locks', which is currently in progress and set to double the capacity of the Canal by 2015 by creating a new lane and allowing more and larger ships to transit.

The miniature sheet consists of a collage of images associated with the Canal's Centenary celebrations; it includes a visual of Cunard's Queen Elizabeth passing through the world famous Panama waterway, with Cunard also celebrating next year the 175th Anniversary of its first ship Britannia setting sail in July 1840.The image also includes a map of the Canal and a high definition photo of Manxman William Kennish.

Maxine Cannon, General Manager of Isle of Man Stamps and Coins said: "The Panama Canal is a remarkable project and considered one of the 'Seven Wonders of the Modern World'. On the Centenary of its first passage we are delighted to present our miniature sheet which marks the occasion. A number of challenges were faced during the Canal's development which stalled its progress, and yet through the perseverance of its workforce, celebrated liners such as Cunard's Queen Elizabeth now use it every year. We would like to thank our supporters Cunard for their assistance and congratulate them on their 175th Anniversary in 2015."