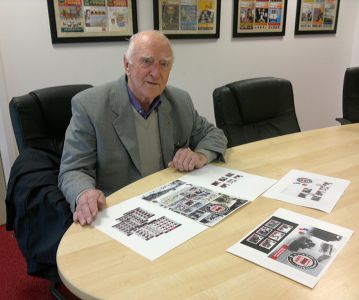 To commemorate the 70th Anniversary of D-Day Isle of Man Stamps and Coins is pleased to present a striking set of six stamps, commemorative sheet and limited edition folder, produced in support of the Royal British Legion and The Normandy Veterans Association. This emotive issue is due for release on the 8th of May to commemorate the 6th of June 1944, the day in which D-Day took place.

The allied invasion of the Normandy beaches on 6th June 1944 was the largest amphibious assault ever and one of the most heroic, audacious and significant battles of World War II (WWII). Known as Operation Overlord, the invasion involved nine army divisions in the initial attack with the support of over 7000 ships and 11000 aircraft. More than 75000 British and Canadian troops, and 57000 US troops landed on the beaches, with a further 24000 landing by air. The beaches known by their Overlord code-names, Sword, Gold and Juno in the East, the site of the British and Canadian landings, and Omaha and Utah to the West, where American forces were concentrated.

In the text that accompanies the stamps Manxman Hector Duff provides a very detailed and personal account of his memories of Operation Overlord, and the unexpected resistance as the allies tried to push into France and force the Germans back into their own country.

Hector's story of events, chronicled by Colonel Charles Wilson of the Isle of Man Cadet Force describes how he looked at D-Day as a crossroads between the long war already fought and the final push which was at the end of WWII. His account builds a clear picture of the events that unfolded on the day, from the rough Channel crossing in the Landing Craft Tanks, to the realisation of the hundreds and hundreds of vessels surrounding them and his discomfort at the heavy firing and amount of infantry dead on the beach and in the water from the initial waves.

The set of six stamps in the issue feature original black and white prints of photos from the infamous beach landings up until the liberation of Europe. In addition, a commemorative sheet that incorporates stamps from the 50th, 60th and 70th D-Day Anniversaries has been included and a limited edition folder is also available, from which £2.50 of each sale will go to The Normandy Veterans Association, for the new memorial that will located in the National Arboretum at Alrewas in Staffordshire, in remembrance of those who fought on the beaches of Northern France in 1944.

Hector Duff said: "Isle of Man Stamps and Coins have created a moving stamp issue commemorating the 70th Anniversary of D-Day. The black and white images used have been taken from photographs from the Press Association which are poignant and truly representative of D-Day. They bring back memories to me of the day itself and the hard ones that followed before victory was secured."

Maxine Cannon, General Manager of Isle of Man Stamps and Coins said: "We are delighted with the stamps that have been produced; D-Day was a major turning point in WWII. Hector's account is true of many veterans that survived the Day and the events that followed. His recollection depicts D-Day as it happened and is a fitting tribute to those that fell and the veterans who survived."