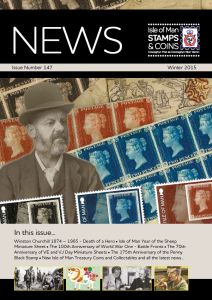 Isle of Man Stamps and Coins is pleased to announce that its latest newsletter issue has now been released. Jam packed full with all the very latest news highlights and details of all the forthcoming issues. The newest is a miniature sheet commemorating the 70th Anniversary of VE and VJ Day, followed by issues, The Centenary of WW1 1914-1918 - Battle Fronts and 175th Anniversary of the Penny Black. In addition is newly released issue – Winston Churchill 1874 - 1965 Death of Hero and a Year of the Sheep miniature sheet. There are also details of current stamp and coin issues and special products. The pages are superbly presented using text and stunning imagery - it is one not to be missed!

Featured under the new 2015 collections is the Year of the Sheep miniature sheet which launched on January 2. The sheet produced together with the Isle of Man Chinese Association is a celebration of the Chinese New Year and recognises the Islands special commercial and diplomatic relationship with China. Also on January 2, the Post Office proudly launched its Winston Churchill 1874 – 1965 Death of a Hero stamp issue to commemorate the 50th Anniversary of the death of Sir Winston Churchill, the man once voted 'Greatest Briton' by producing a set of eight evocative stamps and a coin celebrating his life.

On February 17, the Post Office has two stamp issues marked for release.

Firstly, the Centenary of WW1 1914 – 1918 - Battle Fronts issue sees the continuation of the military theme in support of the Royal British Legion. This is the second part of the WW1 series issued during the centenary of the Great War. The six stamps here depicted in sepia and black and white explore the various fighting fronts of - Palestine, Gallipoli, Italy, the Home Front, the Western Front and the Eastern Front.

Also, due for release is a stamp issue celebrating the 175th Anniversary of the Penny Black, the world's first adhesive postage stamp. Working in collaboration with the world's longest established rare stamp merchant Stanley Gibbons the Post Office is pleased to present a potted history of the evolution of postage. Six stamps have been produced which include depiction of the Penny Black, the Penny Red which replaced the Black, and the Twopenny Blue. Besides the Penny Black stamp issue the Post Office has produced a coin.

Finally, on February 26, the Post Office will release a miniature sheet commemorating the 70th Anniversary of VE and VJ Day in support of the Royal British Legion. VE and VJ Day mark key events in WW2. VE Day commemorates the end of the war with Germany on Tuesday May 8, 1945 and VJ Day, the day that Japan surrendered to the allies following almost six years of war on August 15, 1945. The stunning miniature sheet produced to commemorate VE and VJ Day uses two stamps with designs created by local Island resident, artist and war veteran James Fenton for VJ Day and a photograph from the Press Association for VE Day.

Furthermore, the newsletter also provides readers with details of the latest year collections.

To keep abreast of forthcoming and newly released issues and collections sign up for a copy of the quarterly newsletter here, and to view the latest edition click here.