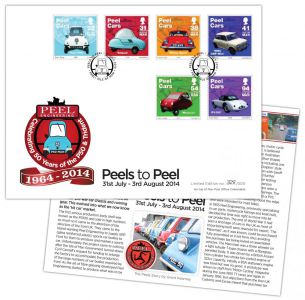 Isle of Man Post Office is celebrating the 50 year anniversary of the Peel Engineering P50 and Trident with a special edition postmark cover limited to just 500 hand numbered items, and will also be participating in the 'Peels to Peel Festival' launch event, organised by Peel Car owners and enthusiasts in partnership with The Manx Transport Museum. The opening for the event will be held on the 1st of August from outside of the Post Office's Regent Street branch at 9.15am. The Festival runs until 4th of August.

The iconic cars will begin arriving on the Island from the UK and Ireland on Thursday 31st July and on the following morning, Friday 1st of August, seven will then travel to Regent Street Post Office, Douglas for the official opening of the 'Peels to Peel Festival', at which point the Isle of Man Post Office will officially launch its special anniversary postmark cover. The cars will then head to Douglas Railway station where a special train will be laid on to have them loaded on the train using flat wagons and they will then travel to Port Erin to take part in the 140 year Port Erin Rail Line celebrations. The drivers and their cars will then move onto Peel for an evening reception and buffet meal where George Gelling former works foreman will treat guests and drivers to learn about the history of Peel Engineering. Tickets for this event are available by contacting Peter Mylchreest at teviotdale@manx.net or by phone on 01624 801200.

Over the next few days drivers will enjoy a leisurely lap of the TT, with a visit on route to Jurby Transport Museum. The Festival will also coincide with this year's 'Peel Carnival' and 'Manx Classic' car rally both of which drivers will attend in addition to them receiving a tour of the original Peel Cars factory buildings.

Peel Engineering was founded by Cyril Cannell in the late 1940s, it initially worked on boats as well as carrying out some aircraft development work, before moving to motor vehicles, and was one of the first companies to produce a car body entirely from fibreglass. In 1955 it developed its first car 'The Manxman', later renamed to 'The Manx Car', which never entered standard production.  During 1962 the staff of Peel tried again at the small car market, this time designing a small single-seater, the P50 available in red, white or blue. Encouraged by sales of the P50, Peel Engineering developed a two-seater version known as the Trident, using a completely new design, and the first five were up and running by December 1964. Today around 30 Trident still survive with around 28 P50s.

The special edition 31st July postmarked cover, limited to just 500 hand numbered copies, celebrates 50 years of the highly distinctive Peel P50 and Trident micro cars. In addition to the accompanying illustrated information card by Grant Kearney, Peel Car enthusiast, the cover comprises of six vibrant stamps which include the P50, The Manx Car and one of the remaining Tridents on the 31p stamp which is owned by Grant.

Grant Kearney, 'Peels to Peel Festival' organiser said: "Fifty years after the launch of the Peel P50 this iconic car remains a crowd puller.  Designed and built by Peel Engineering these cars were said to be ahead of their time and judging current interest and congested roads, that was very true.

Around 25 P50s and Tridents are returning to Peel in July as part of the 'Peels to Peel Festival'. The Manx people have shown incredible interest in this event and have been very supportive.  The cars will be seen out and about around the Island for the three days starting with a launch at Douglas Post Office of a specially commissioned collector's edition marking the Festival and 50 years since the launch of the P50 & Trident. Isle of Man Stamps & Coins have pulled out all the stops and produced a brilliant Peel Cars collector's special cover with a unique Peel postmark which is way beyond what I was expecting.  Seven P50s and owners will travel to Port Erin on the train that afternoon to attend the 140th anniversary celebrations of the line.

We will be departing from the Grandstand at 10am on Saturday 2nd in an attempt to complete the TT course with around 12 Peels.  Finally we will be part of Peel Carnival on the Sunday and will be attending the Manx Transport Museum Group Classic car rally."

Maxine Cannon, Isle of Man Stamps and Coins General Manager "Our special postmark cover offers collectors a limited edition piece of Manx automobile history and celebrates the ingenuity of Peel Engineering in the production of the its iconic P50 and Trident Cars."

The collector's special postmark cover is available to pre-order here