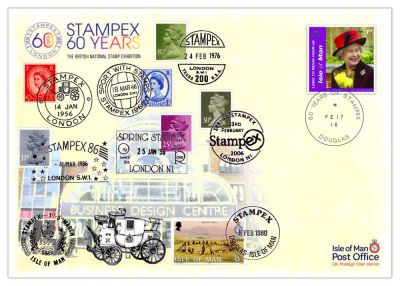 Representatives from Isle of Man Post Office's Stamps & Coins division will this week attend and exhibit at this year's Spring Stampex show which celebrates its 60th anniversary. The show will be held from 17 - 20 February in London at the Business Design Centre in Islington.

On the first day of Stampex (February 17), the Post Office will unveil its new commemorative WW1 centenary stamp issues for the Battle of Somme and Battle of Jutland. To add to this, it will officially launch its Long to Reign Over Us stamp issue which marks the Queen's 90th birthday and showcases the work of The Sun newspaper's royal photographer Arthur Edwards MBE, whose favourite eight photos of the Queen appear on each of the stamps. On the day, Arthur will also make a guest appearance at Stampex where he will be on hand from 2.00 - 3.30pm at the Post Office's stand signing the stamps first day covers.

Isle of Man Post Office will attend the show with some of its most anticipated stamp collections including latest releases, Chinese Year of the Monkey, 150th anniversary of Royal Aero Society and it's newly released Long to Reign Over Us stamp collection celebrating Her Majesty the Queens 90th birthday. A special cover to mark the shows Diamond Jubilee has also been produced and this, along with all its latest and newly released stamp issues, can be purchased from the Post Office's stand.

Finally, a competition will be held during the show where five lucky collectors will win a selection of fantastic prizes all courtesy of Isle of Man Stamps & Coins. Come to Stampex and visit stand 78 for details and to complete an entry form.

Maxine Cannon, General Manager of Isle of Man Stamps and Coins said: "Our presence at this year's Spring Stampex will enable us to showcase our latest stamp collections to existing and prospective collectors and trade customers who attend the show from around the world that we wouldn't ordinarily be able to easily meet with."

"Isle of Man Stamps and Coins have attended Stampex for a number of years now and it has continued to be of great value to us. We are confident that this year's show will be equally worthwhile and look forward to attending."

The Isle of Man Stamps & Coins team will be at Stampex on stand 78 from 17 - 20 February alongside Benhams and Gibraltar Post Office. Visit iompost.com for details of all the latest stamp collections.