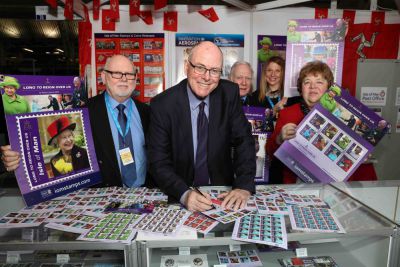 Isle of Man Stamps & Coins representatives have returned confidently to the Isle of Man after attending and exhibiting at last week's 60th anniversary Spring Stampex show, where the business received a positive response to its latest stamp collections. Aside from selling its stamps the event, which was held at London's Business Design Centre from 17-20 February, enabled the team to meet with a number of its longstanding customers and key contacts.

Stampex is a leading bi-annual stamp event organised by the Philatellic Traders' Society, and this year's show saw around 100 exhibitors attend from the UK and around the globe.

Whilst at the event, the Post Office launched its two latest stamp issues for the Battles of Jutland and Somme, and WW1 re-enactor Paul Quilliam helped to promote these from the business' stand where the Post Office was positioned alongside Benhams (collectables specialists) and Gibraltar Post. There was also a guest appearance from Arthur Edwards MBE, royal photographer, who officially launched the Post Office's 'Long to Reign Over Us' stamp issue, which uses eight images of the Queen as taken by Arthur. Included within this collection is a special limited edition cover signed by the highly acclaimed photographer with a donation from each cover sale being given to voluntary organisation Stamp Active which promotes stamp collecting for young people in the UK.

To add to this, Isle of Man Stamps & Coins has produced a special celebratory cover to mark the 60th anniversary of the London Stampex show, franked with a 'skeleton' postmark for the opening day of the spring show; this along with all its latest collections went on sale from the stand.

Commenting on the 60th anniversary Stampex cover at the show, Stampex Chairman, John Curtin said: "It's a really impressive cover that provides a fitting tribute to the show on its 60th anniversary."

He continued: "It's great to see so many dealers here, people promoting the hobby who lasted these 60 years."

Maxine Cannon, General Manager of Isle of Man Stamps and Coins commented: "The Spring show was a great success and our latest stamp collections were well received with a good volume of sales as a result. The show is an important one in the philatelic calendar and we were also pleased to celebrate its Diamond Jubilee with our special anniversary cover."

She continues: "The team and I found this year's spring Stampex to be of great benefit and we look forward to exhibiting again at the 2017 show."