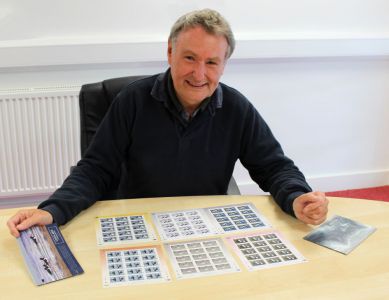 The Isle of Man Post Office is pleased to present a set of six stamps featuring the artworks of renowned local wildlife artist, Jeremy Paul, in celebration of the conservation work of the Manx Birdlife Census. The stamps are due for issue on June 29th.

A Census of all seabirds nesting around the Isle of Man's coastline was undertaken in 2017 by local charity, Manx BirdLife, who work to protect the Islands wild birds and the habitats on which they depend. The research, which is ongoing, was aimed at monitoring the Islands diverse coastal bird life.

Lancashire born, Jeremy Paul has lived on the Isle of Man for many years now. He originally trained as a marine biologist and is a completely self-taught artist, the essence of his work being the accurate portrayal of wildlife in its environment. Jeremy has won awards for his work including BBC Wildlife Artist of the Year – Category Winner 2010, 2011, 2012 and the British Wildlife Award at the National Exhibition of Wildlife Art 2015. He has also just been shortlisted for the David Shepherd Wildlife Foundation's (DSWF) Wildlife Artist of the Year award.

For this stamp issue Jeremy has painted six species of birds, each of which are of Conservation Concern within the British Isles.

Wading through the shallow sea water, two oystercatchers can be seen on the 47p stamp, with their boldly coloured black and white bodies, distinctive red bills and legs.

The 80p stamp shows both the male and the female eider duck floating in the calm sea. The male's unmistakable black and white plumage is particularly striking, as well as the way Jeremy Paul has captured the rippled reflection of the eider in the undulating sea.

The little tern, a bird whose population has been boosted in the Isle of Man due to conservation efforts, can be found on the 98p stamp. The little tern is shown resting in the pebbles and shells of the coast.

The £1.30 stamp shows the black guillemots with their black and white feathers on a serene ocean. The Isle of Man hosts around 600 individuals, 1% of the breeding population of the British Isles.

Finally the £1.94 stamp shows a group of black and white Razorbills on a cliff face overlooking the sea. Like many seabirds the species is vulnerable, due to the pressures on food caused by a range of factors including climate change.

Commenting on the stamps, Jeremy Paul said: "The Island is a great place to observe coastal and seabirds so I was delighted to be asked to produce this series. The main problem was to decide which birds to choose. I think the selection reflects some of the variety we see around the Island and it was a pleasure to work on the paintings. It is always a thrill to see the first set of stamps – I always think of them as tiny limited edition prints which travel the world!"

Isle of Man Stamps & Coins General Manager, Maxine Cannon, said: "We are delighted to release this set of stamps to celebrate the important conservation work of Manx BirdLife on the Island. It's also a pleasure to work once again with Jeremy on these beautiful designs which he uses his distinct artistic style to bring the birds to life."

The Coastal Birds stamp issue can now be pre-ordered at http://www.iompost.com.