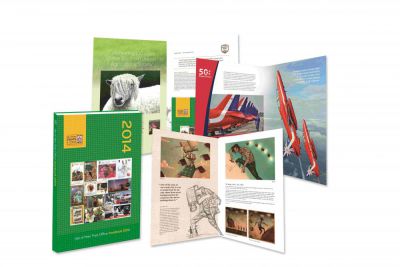 The Isle of Man Post Office is pleased to announce the official release of its 2014 Yearbook, the perfect addition to the 2013 edition. Jam packed with a full set of all stamps and miniature sheets issued by the Post Office in 2014, along with fascinating prose and imagery about each. Limited to just 1000 copies, this book offers collectors a diverse compilation of art history and heritage of the Island.

Bringing together 14 vibrant chapters ranging from the celebratory to the commemorative it includes Isle of Man Post Office releases for - D-Day, Dark Sky Discoveries, Manx Ark Rare Breeds and the fiftieth anniversary of Manx Radio.

During the year, Isle of Man Post Office was especially proud of its partnership with Manx National Heritage and Lloyd's Bank, in which it created a set of ten stamps to celebrate the life work of world renowned Manx artist, Archibald Knox on the occasion of his landmark 150th Birthday. The stamps featured ten stunning images from Knox's greatest achievement, the illuminated manuscript, The Deer's Cry.

Another notable edition was the tribute to the iconic Red Arrows in its fiftieth display season anniversary, here six stunning, bursting with colour images depicting the speed, agility and precision of the world-famous synchronised acrobatics team were used to create a set of stamps.

This year also marked the centenary of the commencement of World War I (WW1) and the Post Office was pleased to commemorate this through the release of eight stamps depicting images of trench warfare along with a miniature sheet of trench art, all produced in support of the Royal British Legion.

Also contained within this book is a celebration of this year's twelve month festival of art on the Isle of Man, the Island of Culture 2014. To mark the occasion the Post Office created a set of eight stamps featuring the work of Manx artist Juan Moore, marking the eight cultural topics of - dance, music, drama, literature, visual arts, design, film and craft.

This prized collectable 80 page hardback Yearbook is an essential to any collection, bringing together every 2014 stamp issue and miniature sheet. Limited to just 1000 copies - make sure you get yours in time for Christmas, before stocks run out!