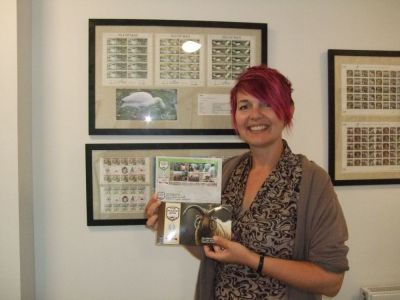 Isle of Man Stamps and Coins is delighted to present a special postmark cover, limited to just 100 editions, to mark the Centenary of the Southern District Agricultural Society and showcase the work of the Manx Ark Project.

This year's Centennial show will be held on Saturday 26th and Sunday 27th of July at Great Meadow Castletown, and is set to be one of the biggest yet with both past and new exhibitors along with a wide variety of farm breeds including, 100 cattle, 200 sheep and 200 horses all coming together.  A number of rare breeds will also be on display including the famous Manx Loaghtan sheep.

The special edition cover is postmarked for July 26th and limited to 100 items. It features the complete set of six Rare Breeds stamps which were commissioned to mark 100 years of the Southern Show and recognises the incredible work being done on the Island to preserve rare breeds. The stamps will be available for purchase at the Show only, on a first come first serve basis from the Heritage Tent, with a contribution going to the Manx Ark Project. The postmark provides a lasting keep sake of this significant anniversary.

Sarah Comish, Secretary of The Southern District Agricultural Society said: "The Southern District Agricultural Society is proud to be associated with the Post Office in the Centenary year of the Show. We look forward to displaying the limited edition Rare Breeds Stamps alongside some special exhibits of cattle from the Manx Ark Project, of Great Britain's most threatened species.

The Southern Show already has some well-known Manx exhibitors of British Breeds. These animals were once on the verge of extinction but are now thankfully enjoying a revival. They include the Dairy Shorthorn and the Hereford cattle, the Manx Loaghtan, Border Leicester, Dorset Down sheep, and the Golden Guernsey goat. The Shire and Clydesdale horses were once quite literally the backbone of British farming, but with the advance of machinery, they too were almost lost. Thanks to some dedicated breeders, we can still see these wonderful gentle giants in the Show ring. It is wonderful to see all of the old-time breeds shown to such a high standard as prize winning stock, and having significant value for the modern farm."

Maxine Cannon, Isle of Man Stamps & Coins General Manager said: "We are delighted to have produced this special postmark which marks the Centenary celebrations and uses the beautiful artwork by Dr Jeremy Paul, world renowned wildlife artist. There are only 100 editions available and we are sure they will form a highly sought after memento. The Southern District Agricultural Society is a staple celebration and Manx farming is still central to our culture. We feel that the commemorative limited edition Rare Breeds cover is a perfect way to pay tribute to this."

This special cover will be available from the Heritage Tent at the Show and sold on a first come first serve basis until stocks run out.