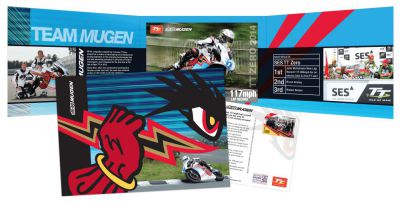 Despite his wrist injury the Morecambe Missile completed the one lap at an impressive 117.366 mph with team mate and closest competitor Bruce Anstey as runner up finishing in a comfortable second place and Robert Barbar completing the race in third place. At the time of winning McGuinness commented on his own performance: "That's not hanging about on a battery. You might like them or you might not like them, but I was riding hard there."

After two consecutive years of McGuinness being placed second in the all-electric contest, Honda made significant improvements to the third iteration of its "God of Electricity", the English translation of Shinden, and built not one but two bikes which went on to achieve victory with the all new challenger and contender in the 2014 race.

The limited edition A5 postcard features an action packed photograph of John McGuinness at speed on the Mugen Shinden as he leads the way to victory and on the reverse it has a postmark for June 4th 2014, the date on which he won the race and text from Kyle White about McGuinness' race win. The limited edition gift pack includes the A5 postcard which is held in vibrant roll-folded card that has a wealth of images along with a full story about the Mugen and details of the official race results. These two very special items are limited to just 2500 items collectively.

Maxine Cannon, General Manager of Isle of Man Stamps & Coins said: "With John's wrist injury it seemed that he might not be fit enough to compete at this year's TT races so we were delighted when he made his debut and won a new lap record at an incredible 117mph in this year's TT Zero race. In celebration of this magnificent triumph we have issued a very special postcard and gift pack that captures the moment in time and it would make a fantastic addition to any collection of a motorcycle enthusiast."

The postcard and gift pack is available now from the Regent Street Post Office in Douglas and online from www.iomstamps.com. The gift pack is priced at £5 and the postcard £1.50.The Isle of Man Post Office stocks a wide range of TT and road racing products, including the John McGuinness – The First 20 TT Wins collection.