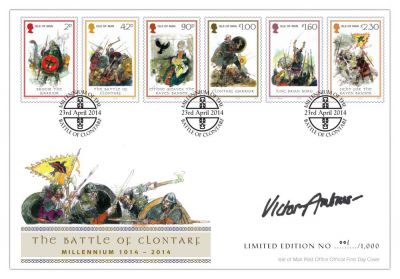 On Good Friday, the 23rd of April 1014 a fierce battle was fought outside the key trading port of Dublin between the High King Brian Boru of Ireland and the Norse, who controlled Dublin and wanted to extend their territory.  The resulting victory for the Irish marked a key turning point in the history of Ireland and stemmed the power of the Norse.

Isle of Man Stamps and Coins marks that date 1000 years on, the millennium anniversary of the Battle of Clontarf, by launching a special postmarked limited edition envelope signed by Victor Ambrus and dated, 23rd April 2014. Only 1000 copies will be available and are priced at £15 each.

The images used on the envelope and within the recently launched stamp sheet are illustrated by Victor Ambrus, well known Channel 4 Time Team Archaeologist. Ambrus's images reproduced on the stamps use bold watercolours and ink that portray the ferocity and brutality of the battle and key figures associated with this or scenes from the medieval event.

As part of the events commemorating the battle, the original illustrations of the stamps will be on display at the Clontarf Castle Hotel in Dublin on Thursday and Maxine Cannon will be present on the day, representing Isle of Man Stamps and Coins on a trade stand with "Clontarf 2014 Committee Boru merchandise", from the stand sets of stamps, first day covers and presentation packs will be available for purchase. Signed covers will also be available to order.

Maxine Cannon, General Manager of Isle of Man Stamps and Coins said: "We are delighted to be able to offer collectors and historians this very important limited edition postmarked envelope that marks the 1000th anniversary since the battle took place. The Battle of Clontarf marked an important turning point in Irish history which helped extinguish Norse ambitions to conquer Ireland."