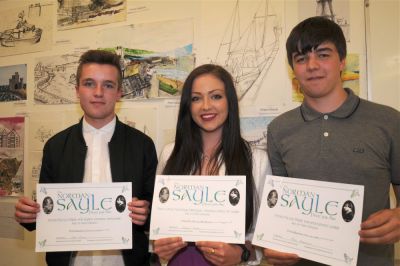 Three outstanding art students of Isle Of Man College have been recognised as the winners at this year's Norman Sayle Art Awards.

Ariane Monds, Peter Beaumont and Sam Clague were each awarded prizes of £100 and certificates for their achievements. The competition run by the Archibald Knox Society and held annually at the College was sponsored for a further consecutive year by the Isle of Man Post Office Sponsorship Committee.

Graham Crageen, Isle of Man Post Office Chairman presented the awards to the three students and said: "I was delighted to present this year's Norman Sayle Art Awards which have been sponsored by the Isle of Man Post Office for a number of years now. This year's artists Ariane Monds, Peter Beaumont and Sam Clague were presented with their prizes and certificates for their award winning work.

Norman Sayle and Archibald Knox were great artists as well as inspirational teachers; both attended the Isle of Man College it is therefore fitting for the students work to be linked to them."

Over the years Isle of Man Post Office has produced several stamp issues celebrating the works of Manx artist and designer Archibald Knox. Earlier this year it presented ten stamps in celebration of Knox's 150th birth anniversary featuring images from illuminated manuscript the Deer's Cry, and back in 2009 The Watercolour issue was released containing six stamp images of landscapes which used a combination of subtle and vibrant colours. Finally, in 1989 Knox's 125th birth anniversary stamp issue was released; it contained five stamp illustrations of pewter, silver, gold and watercolour artefacts.

The Post Office has always had a special affinity with Archibald Knox and in 1920 it commissioned him to produce a bronze war memorial for the six fallen Post Office employees that went to war, and the commemorative plaque still remains to this day at its Regent Street Post Office in Douglas.