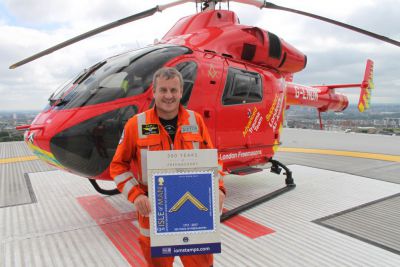 Isle of Man Post Office has issued a set of six stamps to mark the Tercentenary of English Freemasonry. One of the stamps in the collection promotes three Air Ambulance Charities and has been presented to Dr Gareth Davis, Medical Director of London's Air Ambulance.

The stamps in the collection are filled with symbols and references significant to freemasonry including a logo only visible under UV light, GPS references to places important to Freemasonry, and a subtle ribbon honouring the 50th year of office of the current Grand Master, HRH the Duke of Kent.

The sixth stamp in the collection bears the Square, being the Jewel of the Worshipful Master, on a background of overlaid right angles which symbolises morality.

The stamp also features the GPS references of the landing pads of three Air Ambulances, and their call signs (G-LNDN, G-WASS and G-TVAL). Freemasons in the UK have contributed more than £4million to the charities over the last few years so it is a symbolic recognition of the core of freemasonry, charity.

Pictured here is Manxman and Medical Director of London's Air Ambulance, Dr Gareth Davies, on the landing pad at the Royal London Hospital, after being presented with a blow-up of the stamp and a donation of £1500 from Barbican Lodge, which is featured on one of the stamps.

Isle of Man Post Office are proud that their stamps were chosen as the official stamps of the Tercentenary Celebrations by the United Grand Lodge of England and were pleased to support the charitable efforts that benefited these crucial Air Ambulance charities.