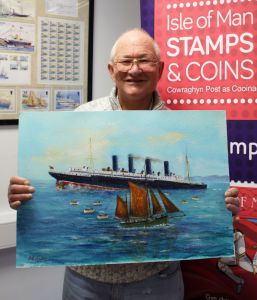 Isle Of Man Post Office has produced a stunning miniature sheet featuring four historic Manx vessels painted by artist, mariner and Manxman John Halsall. The issue also marks a number of historic anniversaries from the Island's rich Manx maritime heritage and is due for release on May 1, 2015.

John Halsall was born during the Second World War in Douglas and raised in Laxey. The sea and ships captivated him from a young age and his father served in the Royal Navy. It was therefore no surprise when John left school at 15 to begin a lifetime of work on the high seas. He worked first and last with the Steam Packet and in between as a local fisherman as well as in the capacity of a deep sea merchant seaman. John continues to paint his favourite subjects in oil and watercolour: Manx vessels of every variety, harbour views, and occasionally the Laxey Wheel and works every day from his studio in Douglas.

The Isle of Man has a long and proud tradition as a seafaring nation and for many generations its people have made a living from this. To celebrate this proud tradition the Post Office has produced a set of four stamps that capture the beautiful oil and watercolour paintings of John Halsall depicting historical Manx vessels: the Master Frank RY95, the Wanderer with the Lusitania, HMS Ramsey and Ben my Chree III.

The Master Frank RY95 is the Island's longest-surviving half-decker still afloat and was built in 1893 or 1895 by Clucas and Duggan in Ramsey and launched in 1896, to cope with the short, sharp seas to the North East of Ramsey where vessels practiced the fishing trade. She was subsequently purchased by the Kinnn family who fished mainly for cod using a long line. She remained with them until 1964 when Willie Kinnin sold her. The Kinnins repurchased her again in 1969, keeping her until 1976. After a thorough rebuild she was then re-launched in 1996 and is now a regular sight at traditional boat events.

In May 1915 luxury cruise liner Lusitania, which was launched by the Cunard Line in 1906 and holder of the Blue Riband, sank in just 18 minutes after she was torpedoed by a German U-boat, causing the deaths of 1,198 passengers and crew. The first vessel to the scene was a small Manx fishing boat from Peel, the PL11 Wanderer. The little boat picked up numerous survivors and took two life boats in tow.

On August 8, 1915 HMS Ramsey, former Steam Packet vessel which served with the Royal Navy was on patrol duty in the North Sea searching for contraband. She stopped a vessel with a Russian flag only to discover that it was in fact a German ship disguised as a Russian tramp steamer and when the Ramsey got closer to the ship the Russian flag was pulled down and the German flag hoisted up, firing machine guns and torpedoes. The Ramsey sank in four minutes. There were 46 survivors. It was one of the darkest single days of the war for Manx people.

Ben my Chree III was launched in 1908 for the Liverpool to Douglas route, and at the time was regarded as the fastest steamer in the British coastal waters. With the outbreak of war in 1914 she and other civilian vessels were seized by the Royal Navy and converted into seaplane carriers. Ben my Chree III took part in the operations at Gallipoli in 1915 and her place in history was secured when she assisted in the sinking of the first vessel to be destroyed by a torpedo launched for aircraft. Her life proved short when she was hit by Turkish gunfire in 1917.

In addition, the presentation pack beautifully illustrates paintings of the Peggy of Castletown and the Steam Packet's Mona's Queen.

John Halsall said: "I can't stop painting, it is a gift that I have and I put it to good use by painting the things that I am passionate about. I have always been fascinated by the sea, ships and harbour scenes, they are beautiful. I was so delighted when Isle of Man Post Office contacted me and asked to use my images in their stamps, they look stunning."

Maxine Cannon, General Manager, Isle of Man Stamps and Coins said: "The Post Office is proud to celebrate the Islands rich maritime history with the release of the maritime miniature sheet using the works of John Halsall, and at the same time mark a number of historic anniversaries from Manx maritime heritage."