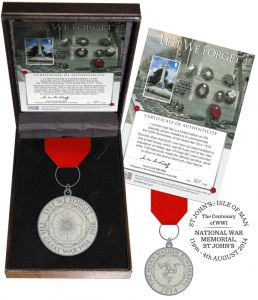 The stamp is postmarked August 4, 2014. On August 3, 1914, Britain had given an ultimatum to Germany to withdraw its troops from Belgium by midnight (central European time) the following day. When the ultimatum passed unheeded, Britain and her empire declared war on Germany on August 4 at 11pm GMT. A total of 8,261 men and women from the Isle of Man enlisted in the armed forces during the 1914-1918 war. 82.6 per cent of the Island's male population enlisted which meant that virtually every family on the Island at that time had at least one relative fighting overseas. By the time that the armistice was declared at 11am on November 11, 1918, a total 1,165 Manxmen had lost their lives, and 950 had been wounded.

Each commemorative medallion includes a certificate of authenticity endorsed by Hector Duff MM BEM, President of the Onchan branch of the Royal British Legion. Mr Duff, a Second World War veteran who took part in the D-Day landings in 1944, commented:

"I think this is wonderful. A very fitting tribute to all the men of our Island, who left our shores to a place very much unknown to them, many never to return and even more with scars which they had to bear for the rest of their life. This is especially good for our young people who can take pride in the contribution their families made to bring peace to the World in 1918."

"The medallion and stamp are poignant tributes to the many post office staff, Manx men and women who served during World War 1. One hundred years on from the outbreak of the war, Isle of Man Stamps and Coins is very proud to play its own part in helping to remember and honour the sacrifices they made. We also wanted to support the good work which the Royal British Legion continues to do in support of all former servicemen and servicewomen, and are extremely grateful for the support from the Isle of Man branch of the charity."

This latest World War 1 commemorative issue complements a number of other Isle of Man Stamps and Coins collections which remember those who served in 1914-18 conflict. The collections include a World War 1 Christmas Day Truce Crown, and a World War 1 Horse No Man's Land Crown. Earlier this year a commemorative crown was also issued to mark the 70th anniversary of D-Day on June 6, 1944.

Pre-orders for the World War 1 Commemorative Medallion can be made here or by phoning +44 (0) 1624 698430, or by calling in to the Regent Street Post Office in Douglas. It is available in two presentation options - in a pouch or in a presentation box. Both versions include a certificate of authenticity.