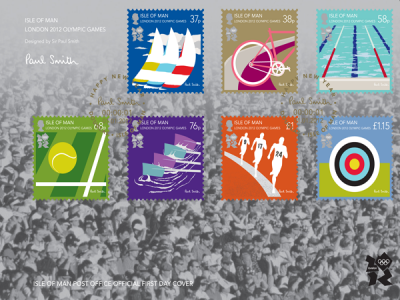 Isle of Man Post Office is delighted to issue a Gold Medal Winners Sheet in celebration of the success of the Men's Team Pursuit in the London 2012 Olympic Games, which saw Manx-born Peter Kennaugh as part of the team.

Just 2012 numbered sheets will be printed. Peter Kenanugh, along with team mates Steven Burke, Edward Clancy and Geraint Thomas won the gold medal in a dramatic race in which they set a new world record time of 03:51.659. Team GB were tipped as the favourites and confirmed this position in qualifying.

Peter is the first Manx-born Olympic Champion since Sidney Swann, who was part of Great Britain's rowing eights team at the 1912 Games in Stockholm.

Less than 24 hours after he rode to victory in the team pursuit, Peter arrived back on the Isle of Man to a hero's welcome. A huge crowd cheered as he walked through the arrivals area of the Isle of Man Airport holding his gold medal. Peter also joined in with an impromptu rendition of the Island's national anthem followed by an emotional speech in which he expressed his thanks for the reception. He held his gold medal aloft which prompted an enormous cheer from the crowd that included fans of all ages. He spent an hour signing autographs and having his photograph taken and passed his gold medal to fans – much to the delight of the many children who turned up to meet their hero.

The Winners Sheet priced £60.00 including free world-wide delivery, can be ordered now for September delivery here